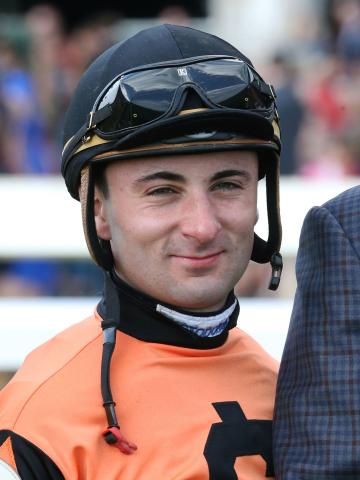 The 2018 Spring Meet marked Adam’s Keeneland debut. He won 11 races during the season, including the Bewitch (G3) on Mom’s On Strike and the Giant’s Causeway on Triple Chelsea. Both were trained by Joe Sharp.

Nicknamed “Biscuit,” Adam Beschizza grew up in England in Newmarket, a center of Thoroughbred racing and training. With members of his immediate and extended family involved in the sport, Adam knew at a young age he wanted to be a jockey. After graduating from the British Racing School, he rode his first race in 2009.

Adam rode a steady stream of winners in England but relocated to the U.S. for larger purses and more opportunity. He worked as an exercise rider for Mike Stidham at Fair Grounds, where he befriended Joe Sharp, and the two would forge a successful partnership. In 2014, Joe became a trainer and the next year he gave Adam his first U.S. mount. Adam has been a leading jockey at Fair Grounds.