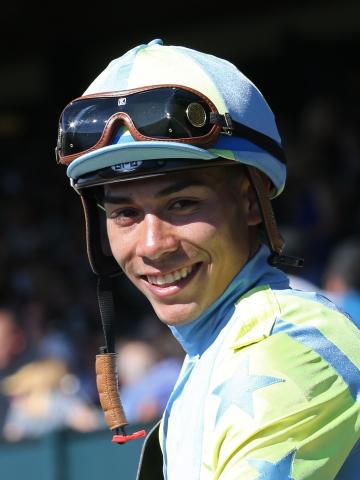 First win came during the 2016 Fall Meet. Had ridden at Keeneland only eight times prior to then. Won a total of 10 races during the season.

First stakes win was the 2017 Madison (G1) on Paulassilverlining. Won the 2020 Madison during the five-day Summer Meet on Guarana.

Received the Eclipse Award as outstanding jockey for 2017.

On the first seven races at Aqueduct on Jan. 20, 2013, he won three races and his brother Irad won four races.

Jose and his year-older brother and frequent riding rival, Irad Ortiz Jr., are from Puerto Rico, where they graduated from the Escuela Vocacional Hipica jockey school. Their grandfather and an uncle also were jockeys.

Irad Ortiz moved to New York in 2011, and Jose began riding at Parx a year later. Jose soon relocated to New York and won with his first mount, Corofin, in March 2012 at Aqueduct. Today the brothers are among the most successful riders in Thoroughbred racing.

In 2016, Irad told Jeff Lowe of “America’s Best Racing” that he always competed against Irad, whether in baseball, basketball or horse racing. “That’s just what we do,” he said. “We’ve always competed, trying to beat each other. It’s still fun. We’re still very close. We share the same corner in the jockey’s room in New York and when we get done racing, he usually stops by my house, just about every day.”