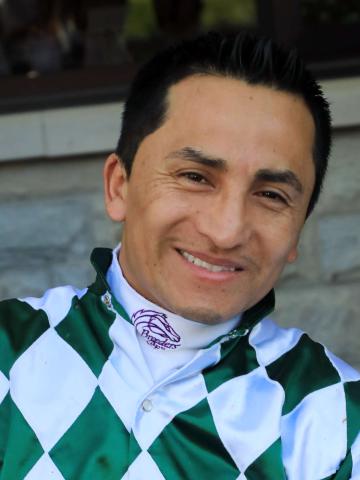 First Keeneland stakes win was aboard Runway Model in the 2004 Darley Alcibiades (G2).

Rode future Horse of the Year Wise Dan to win the 2010 Phoenix (G3) for the first of his record seven Keeneland stakes wins.

With his first of four wins during the 2020 Fall Meet, he earned his first win at Keeneland in 10 years.

Rafael Bejarano attended the races with his father one day in his native Peru by mistake as he thought they were going to a soccer match. He was so taken by the sport he entered that country’s jockey school. He began riding in Lima, Peru, on Dec. 8, 2001, winning with his first mount. He went on to win the apprentice title at Hipodromo de Monterrico.

Rafael came to the U.S. in May 2002 and two months later recorded his first winner aboard his first mount at River Downs (now Belterra Park).

He had success at Keeneland in the 2000s before relocating to Southern California in November 2017 to ride for the late Hall of Fame trainer Bobby Frankel. Since then, he returned to Keeneland a handful of times, most recently to compete in the 2015 Breeders’ Cup World Championships. He moved back to Kentucky in early 2020.