The bullish market continued into the third day of selling at Keeneland’s November Breeding Stock Sale, which recorded strong trade throughout the session  evidenced by double-digit increases in gross, average and median prices and a buy-back rate of less than 19 percent. Breeze Easy purchased both the session’s $725,000 top-priced broodmare – the Grade 3-producing Unbridled’s Song mare J. Quirk, in foal to Game Winner – and the $375,000 top-priced weanling – J. Quirk’s filly by Gun Runner, who was next in the sale ring. Both horses were consigned by Denali Stud, agent. 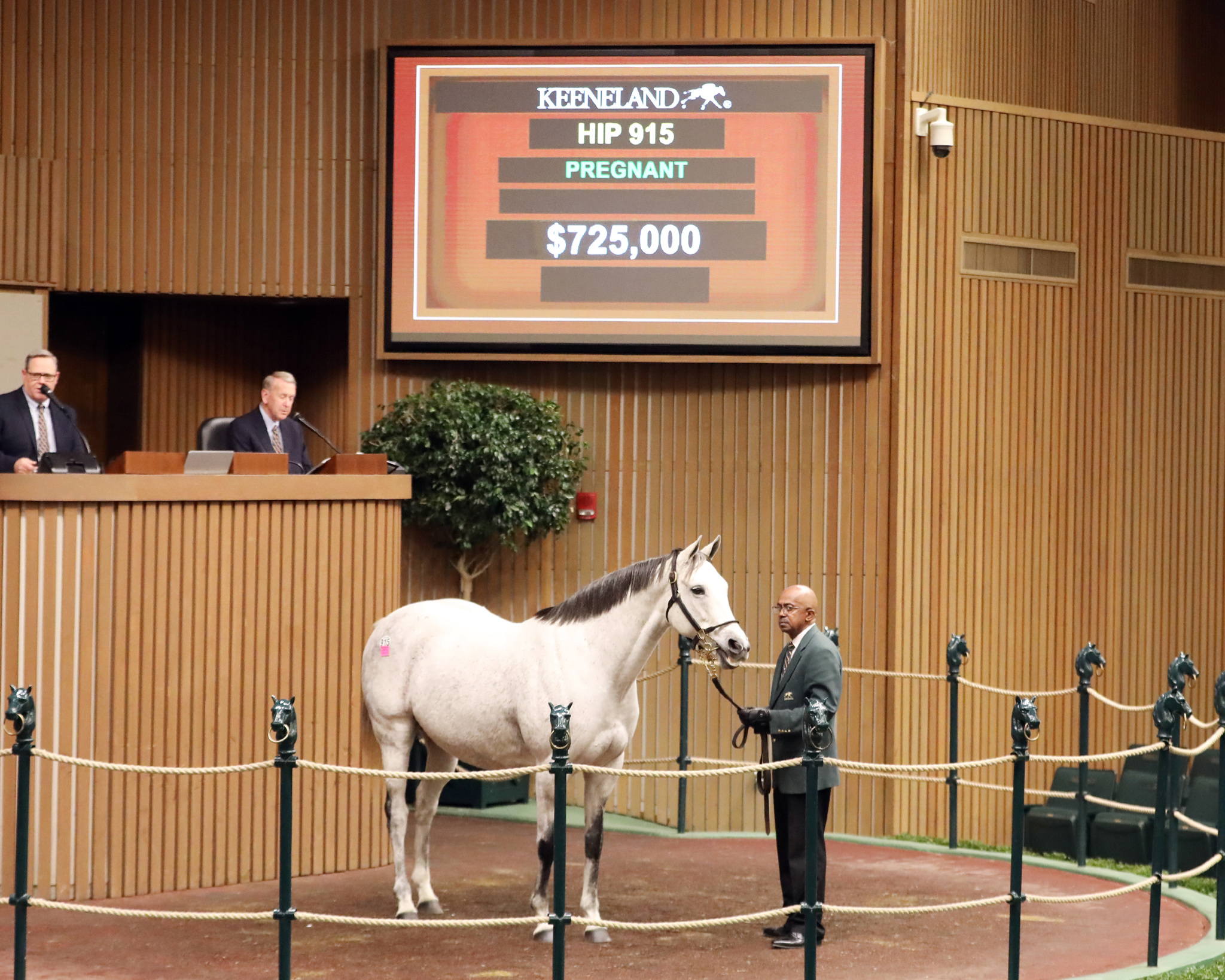 “Today was pretty spectacular from start to finish,” Keeneland Director of Sales Operations Cormac Breathnach said. “The median, which is more representative of the bulk of the market, was $140,000. That’s about $40,000 more than last year and $30,000 more than 2019, which was a banner year, so we are really beginning to push on from those levels. The buy-back rate was under 19 percent. A healthy median and a low buy-back rate really indicate an active market. It was a brilliant day but not just at the top. It was a very strong day all the way through.”

“There is depth of competition for the mares, and that is really encouraging as we step forward,” Keeneland Vice President of Sales Tony Lacy said. “As foal crops get a little lighter, we are seeing energized breeders. These are not people who are fleeting. These are professional, established breeders who are investing and being very determined for the future. I find that encouraging.”

J. Quirk, a 10-year-old mare from the family of Horse of the Year Tiznow, produced Lady Mystify, who scored an 18-length maiden victory at Santa Anita and in September captured the Remington Park Oaks (G3). Out of You’re Beautiful, by Storm Cat, J. Quirk also is from the family of Grade 2 winners Budroyale and Tizdubai.

“We are going to race the filly,” Breeze Easy Managing Director Mike Hall said. “The mare has produced a lot of good physical horses that have also done well. We came for the mare and at the last minute decided to get the weanling. I was a little shocked on the price. I stopped several times.”

Bill Casner paid $460,000 for Summer Vacation, a 9-year-old half-sister to Grade 1 winners Creative Cause and Vexatious and Grade 2 winner Destin in foal to Twirling Candy. She is the dam of Grade 2-placed Ten for Ten. By Eskendereya out of Grade 1 winner Dream of Summer, by Siberian Summer, Summer Vacation was consigned by Hill ‘n’ Dale Sales Agency, agent.

“I’ve got a 3-year-old from the same family by Not This Time that was a good racehorse,” Casner said. “I love that page (for Summer Vacation), and this mare has had good production. In this market I would’ve liked to have gotten her for a little less, but the market will tell you what these horses are worth so I think it was fair enough on her.”

Grade 3 winner Orglandes (FR), who captured the Nov. 7 Zagora Stakes at Belmont Park, sold for $440,000 to Polo Green Stable, agent for Shimokobe Farm. Consigned as a racing or broodmare prospect by ELiTE, agent, the 5-year-old daughter of Le Havre in October was second in the Waya (G3) at Belmont. Orglandes, who is expected to remain in training, is out of the Dansili (GB) mare Influence and from the family of Group 2 winner Moiava (FR).

Andrew N. Warren went to $430,000 for Gale, a 4-year-old stakes-winning daughter of Tonalist carrying her first foal by Not This Time. Consigned by Gainesway, agent, she is out of stakes winner Windy Forecast, by Stormy Atlantic, and from the family of Grade 3 winners Thatlookonyerface and Lou Brissie.

Warren acquired four horses for $1.2 million to lead buyers during the session.

Gainesway, agent, was the leading consignor with sales of $5.31 million for 26 horses.

Curuzu, a 6-year-old winning daughter of Giant’s Causeway in foal to Nyquist, was purchased by Benson Farm for $425,000. Indian Creek, agent, consigned the mare, a full sister to Grade 2 winner Chief Havoc whose dam is Grade 3 winner La Reina, by A.P. Indy. Curuzu also is from the family of champion Queena and Grade 1 winner Chic Shirine.

“She’s one of the best (mares) I’ve seen today,” Benson Farm Manager David Shone said, “and she can obviously throw a good foal. Hopefully, she’ll throw me a Nyquist that looks like that (Curuzu’s weanling colt by Twirling Candy, who was the previous horse in the ring and sold for $200,000).”

Slimey, a 5-year-old stakes-placed daughter of Quality Road in foal to Uncle Mo, sold for $410,000 to Gage Hill II and Lane’s End Farm. Consigned by Paramount Sales, agent, she is out of Argue, by Storm Cat, and is a full sister to stakes winner Quality Response. Slimey is from the family of European champion Rainbow View, Grade 1 winner No Matter What and Grade 2 winners Utley and E Dubai.

Magna Carta Bloodstock paid the amount for the 4-year-old Constitution mare Sevnteeneightysevn, a half-sister to Grade 1 winner and sire Great Hunter carrying her first foal by Kentucky Derby (G1) Presented by Woodford Reserve winner and Horse of the Year Authentic. Out of Grade 3 winner Zenith, by Roy, she also is from the family of Grade 3 winners Owendale and Promise Keeper.

Counterparty Risk (IRE), a 4-year-old daughter of Australia who won this year’s Lambholm South Endeavour (G3), sold for $400,000 to David Lanigan, agent for Heider Family Racing. From the family of Group 2 winner Sarah Lynx (IRE) and Group 3 winners Steel Princess and Steel Prince, the daughter of the Acclamation mare Anklet was cataloged as a racing or broodmare prospect.

“We’ll get her back into training and then make a decision on where she goes,” Lanigan said. “The plan is to run her next year. Depending on how that goes, a decision will be made (about whether she will join the broodmare band).”

The third mare consigned by ELiTE, agent, and sold for $400,000 was stakes winner New York Groove, a 4-year-old daughter of Verrazano carrying her first foal by Authentic. Woodford Thoroughbreds purchased New York Groove, who is from the family of Grade 3 winner Melhor Ainda. Her dam is Back Up Preacher, by Pulpit.

Woodford Thoroughbreds also acquired the fourth horse sold for $400,000, another mare carrying her first foal by Authentic. She was Mucho Amor, a stakes-winning 5-year-old daughter of Mucho Macho Man consigned by Paramount Sales, agent. The daughter of the Rock Hard Ten mare Raucous Lady is from the family of stakes winners John the Magician, Charming Ruckus and Smarter By the Day.

The November Sale continues Saturday with the first session of the two-day Book 3. The auction runs through Friday, Nov. 19 with all sessions beginning at 10 a.m. ET.

Keeneland will accept supplements to the horses of racing age section through mid-November.

Click here for the online catalog for the horses of racing age in Session 10 of the November Sale.

The entire auction is streamed live on Keeneland.com.