Keeneland concluded its premier November Breeding Stock Sale on Wednesday with bullish results that reflected positive market trends: robust commerce among the world’s deepest buying bench; exceptional offerings that yielded 13 lots sold for seven figures, led by champion Midnight Bisou for $5.5 million and a fractional interest in Breeders’ Cup Classic (G1) winner Flightline for $4.6 million; and continued demand for quality foals that produced the North American highest-priced weanling for the ninth time in the past 10 years. 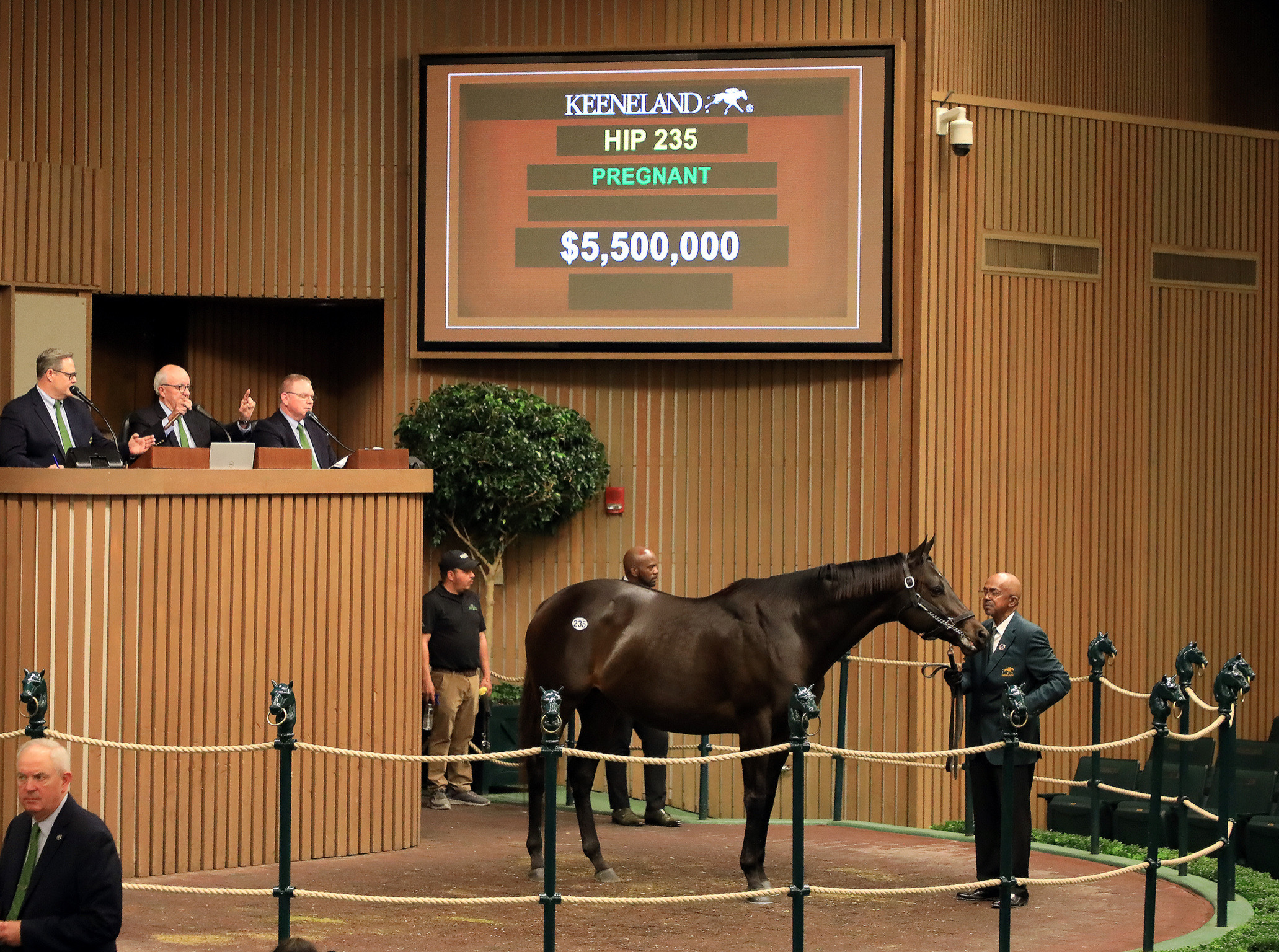 “With the close of the November Breeding Stock Sale, Keeneland is nearing the end of a remarkable fall season, and we send a sincere thank-you to everyone who supported our September and November Sales, Fall Meet and Breeders’ Cup,” Keeneland President and CEO Shannon Arvin said. “Since September, we have been hard at work to showcase the best in Thoroughbred racing and sales, and we are privileged to have had the opportunity to share Keeneland with a global audience. Our November Sale benefited from the excitement of the Breeders’ Cup, the sale of the Flightline interest and the fireworks of Book 1, creating positive experiences from start to finish.”

Twelve horses plus the Flightline interest brought seven-figure bids compared to seven in 2021. Seven of those eclipsed the $2 million mark versus two last year.

“We’ve really made an effort to build up the front end of the sale to make sure we have quality forward and that buyers have the horses they expect to see in the positions they are here for,” Keeneland Vice President of Sales Tony Lacy said. “Everyone has responded favorably to that move. We really appreciate the consignors and breeders for supporting us in the endeavor because without their buy-in it can’t be achieved. Their support allows us confidence to do the things we feel are important, and we’re only getting started. Without making major changes at any point, we want to make sure the tweaks we do make work. Overall, I think we’re on the right track. We’ve got a responsibility to the industry as Keeneland, and I feel we’ve gained a lot of traction in that area.”

“It was an amazing market this year,” said James Keogh of Grovendale Sales, which was among the top 10 consignors, selling 56 horses for $6,330,000, including the broodmares Ragged Rose for $750,000 and Querelle for $700,000. “Post COVID-19, people are really stuck into this business and are trying to take a swing. Purses are up and betting seems to be holding. It’s always a strong market, but the Breeders’ Cup brings an extra special element to it and people realize why we do this. We were a little bit light on weanlings this year, but we were blessed to have some nice mares, especially in Book 2, and the market really embraced them. With the exception of one or two, we sold every mare we brought in here. The mare market really embraced quality. We have a very sophisticated level of buyer at this sale, and they can sniff counterfeit very quickly.

“Kudos to the staff at Keeneland,” Keogh added. “They do a tremendous job; they are the standard- bearers for the horse industry. You look at the number of people from all over the world that are here. It’s an incredibly deep market.”

Competition at all levels of the market ranged across a broad-based, diverse buying bench comprising the world’s major owners and established breeders. Buyers represented a solid mix of domestic and foreign interests, with participants from 29 countries. Ten distinct buyers accounted for the 15 highest-priced horses.

Japanese buyers continued to have a major presence at the top of the market. Sale-topping Midnight Bisou, who was supplemented to the sale, sold to Katsumi Yoshida of Japan for $5.5 million to become the highest-priced horse at the November Sale since 2017. She was consigned by Hill ‘n’ Dale at Xalapa, agent.

Yoshida was the sale’s leading buyer with three purchases for $9.7 million. He also acquired two fillies off the track when he spent $2.7 million for multiple French Group 1 winner Dreamloper (IRE), who competed in the FanDuel Breeders’ Cup Mile (G1) Presented by PDJF and was another supplement, and $1.5 million for Grade 2 winner Jouster.

“The international market was a critical part of the successful outcome of this sale,” Keeneland Director of Sales Operations Cormac Breathnach said. “The Japanese buyers were extremely active, especially at the top, despite the swing in the exchange rate that is not in their favor over the past year. That was very gratifying to see. We had buyers from 29 countries participate in the sale, and that’s on the high end of what we would expect.”

“We put so much effort into the international markets,” Lacy added. “We have representatives around the world who work tirelessly to promote our sales and recruit buyers to come here on a regular basis. Keeneland is a global marketplace, and we work on that very heavily. We had 60-70 Australians here for the sale, which in terms of numbers we haven’t seen in years. I’ve seen Europeans who haven’t been here in five, six, seven years. They are back and they were active. They are energized by what they see here. There is a new generation of breeders from Europe who are now putting Keeneland sales on their annual schedule, and that is very encouraging. Our status in the international sphere is very strong and we want to keep building on that.”

The November Sale received an extra boost when a 2.5 percent interest in Flightline sold for $4.6 million to Brookdale Farm’s Freddy Seitz, on behalf of an undisclosed client, in a special auction immediately prior to the Book 1 session.

“We’re trying to push boundaries all the time, and this was a situation where the stars aligned,” Lacy said. “When Bill Farish (at Lane’s End) first mentioned this was a possibility, we were exploring how to use virtual reality and the Metaverse to bring a new fan base into the sales arena. It was a very exciting venture for all of us to be involved in. We want to thank West Point and Lane’s End and all the partners in Flightline who made it happen. It went off better than we could have ever hoped.”

Jane Lyon’s Summer Wind Equine, breeder and co-owner of Flightline, was the third-leading buyer when she paid $4,625,000 for four fillies and mares possibly to send to the stallion: the race fillies Edgeway, who competed in the Breeders’ Cup Filly and Mare Sprint (G1) ($1.7 million) and Park Avenue ($1.45 million) and the mares Proud Emma in foal to Charlatan ($1 million) and Analyze in foal to Hard Spun ($475,000). 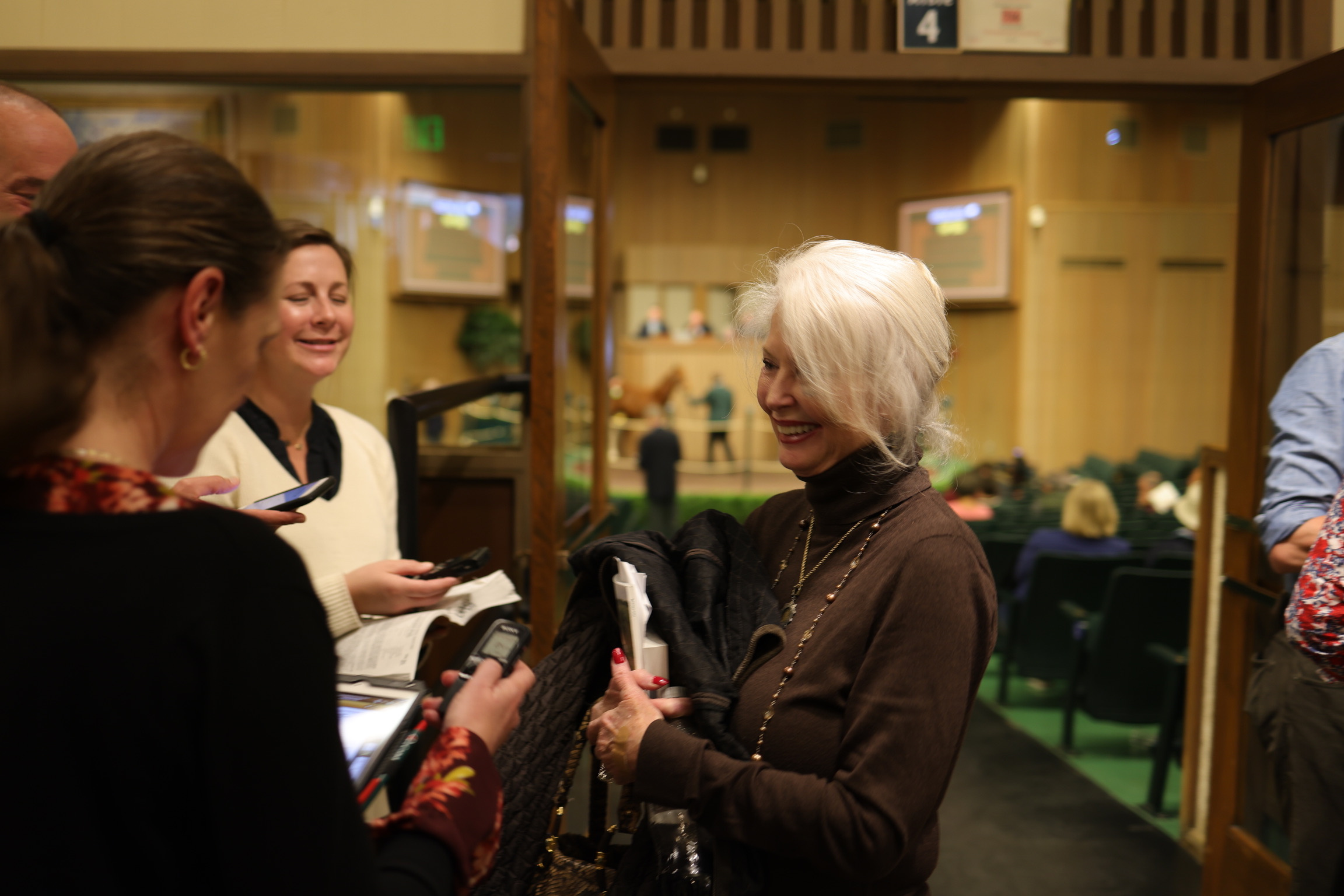 In the name of Pin Oak Stud, which they recently acquired, Jim and Dana Bernhard purchased 15 horses for $4,354,000. At $1 million, their most expensive purchase was Sweet Sami D, in foal to Gun Runner.

M.V. Magnier went to $2.6 million to obtain Marion Ravenwood, dam of 2022 multiple Grade 1 winner Nest and stakes winner Lost Ark, in foal to Curlin, and paid $1.5 million for the top-priced weanling, a daughter of Medaglia d’Oro out of Serena’s Cat, by Storm Cat. The filly, the highest-priced weanling sold in North America this year, is the most expensive weanling at the November Sale since 2015. Dam Serena’s Cat sold for $1.4 million as a weanling at the 2003 November Sale. 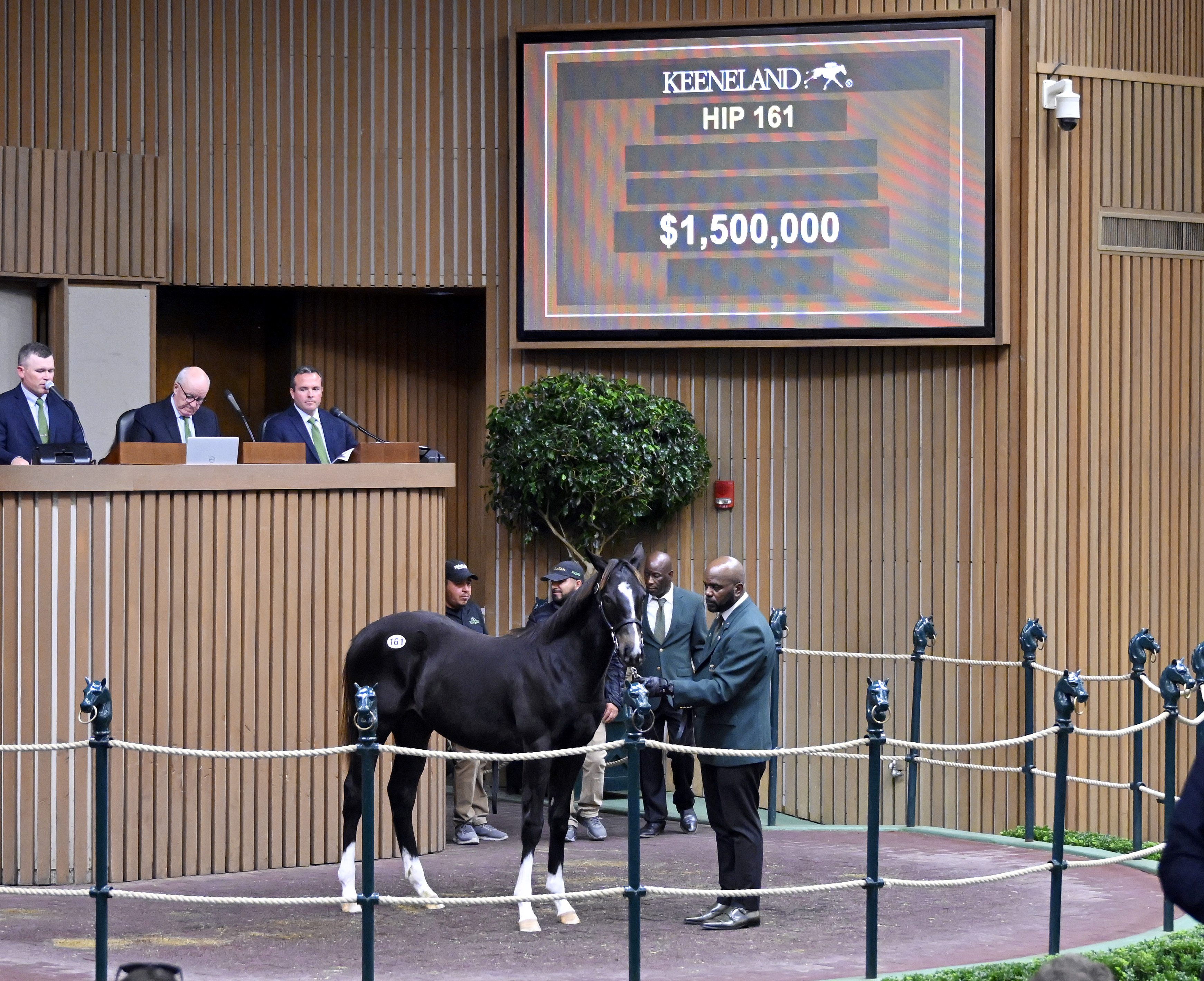 The weanling market continued to be extremely competitive, producing North America’s top-priced weanling for the fourth consecutive year. Results proved the demand for quality individuals: Fifty-two weanlings sold in Book 1 for $12,715,000 (includes private sales), for an average of $244,519 and a median of $200,000.

“In Book 1, we grossed 45 percent more for weanlings than we did last year,” Breathnach said. “So we feel great support from breeders and consignors. It’s been a terrific collaboration. We depend on them heavily because your sale is only as good as the catalog you can put together.”

The leading sire of weanlings in November was multiple Grade 1 winner and $3.4 million earner McKinzie, who was represented by 23 members of his first crop that sold for $3,162,000.

“The overall market was strong; when you came across the right one, it brought plenty of money,” said Archie St George of St George Sales. “We did have to stretch a lot, especially on the nicer ones by proven stallions. It’s been like this for a couple of years. The bottom line is there are a lot of good judges out there and it’s very competitive. We’ll take a shot with newer stallions; it all boils down to the physical comes first. The young stallions that stuck out in my mind were Vekoma and War of Will.”

“(The market) is very strong and competitive at all ends,” O’Callaghan said. “Books 4 and 5 were very strong. The weanlings have sold extremely well. We bought two by Authentic; I thought he had some nice horses overall. The pick of the first-crop sires was probably Vekoma. He had a lot of representation, and they were just very solid and good movers. It was easy to like quite a few of them. We bought two and bid on several others. (Vekoma) was probably the most consistent. Volatile had some nice horses, and we saw some nice Game Winners early in the sale.”

Lane’s End led consignors with sales of $23,460,400 for 129 lots. Highest sellers were champion Shamrock Rose, in foal to Curlin, who sold to Japan’s KI Farm for $3 million, and the aforementioned Edgeway and Park Avenue. Lane’s End also consigned the interest in Flightline, who has been retired to the farm.

“(Being leading consignor) doesn’t happen that often, but when it does you just have to enjoy it and be proud of everybody who played a part in it,” Lane’s End Sales Director Allaire Ryan said. “We had strong Book 1 and Book 2 drafts in terms of the mares and race fillies we offered. We did have a couple of standout weanlings that were really well received by the market. When you have good physicals and attractive sire power and pedigrees on the dam side, the horses are able to tick each box. For potential buyers, it aligns nicely. The amount of foot traffic we had early on was fantastic.

“(The success of the sale) was a combination of things,” Ryan added. “You could attribute it to the Breeders’ Cup being right here, but Keeneland did an amazing job recruiting international buyers to come to the sale. It lined up the right way. When you get a few mares that exceed your expectations like Shamrock Rose and Park Avenue, those are horses you knew were going to have appeal, but it’s almost impossible to put a dollar value on them when you’re appraising them. If you had a quality offering, you were going to be rewarded. There is plenty of depth to the market when there is quality.”

Two weanlings, both consigned by Taylor Made Sales Agency, agent, sold for $45,000 each to top the final day of the sale. A filly from the first crop of Grade 1 winner Honor A. P. out of the winning Midshipman mare First Salute sold to Upper Mill Stable. A colt by Kantharos out of stakes winner I’m Mom’s Favorite, by Indian Charlie, was bought by J. T. Vill.

“We at Keeneland give a special thanks to our consignors and buyers for their support throughout the year, and we send our best wishes for a successful breeding season,” Tony Lacy said. “Our teams continue to build on the synergy between our racing and sales operations, and your participation helps fund Keeneland’s world-class racing program and initiatives that enhance the entire horse industry.”

On Thursday, Keeneland will present the November Horses of Racing Age Sale. The single-session auction starts at noon.

All Keeneland sales are streamed live on Keeneland.com.

The 10th Annual Sporting Art Auction will begin at 4 p.m. on Friday.