Grade 1 winner Lady Prancealot (IRE), who was third in the Sept. 26 Rodeo Drive (G1) at Santa Anita, will be offered as a racing or broodmare prospect during the premier Book 1 of Keeneland’s November Breeding Stock Sale on Nov. 9. Taylor Made Sales Agency, agent, will consign the 4-year-old daughter of Sir Prancealot (IRE), who has earned more than $640,000 while competing against the best of her division.

Lady Prancealot’s connections all praise the filly for her talent and consistency.

“She’s been unbelievably sound,” co-owner Michael Iavarone said. “She hasn’t missed a beat. She’s pretty much taken us everywhere we wanted to go.”

“Lady Prancealot has taken our partners on a great ride,” said Phillip Shelton, Racing Manager of co-owner Medallion Racing. “She won our first graded stakes at Keeneland in the Grade 3 Pin Oak Valley View before going on to win the Grade 1 American Oaks. We formed our partnership to have fillies like her and count ourselves lucky that she shows up every time.” 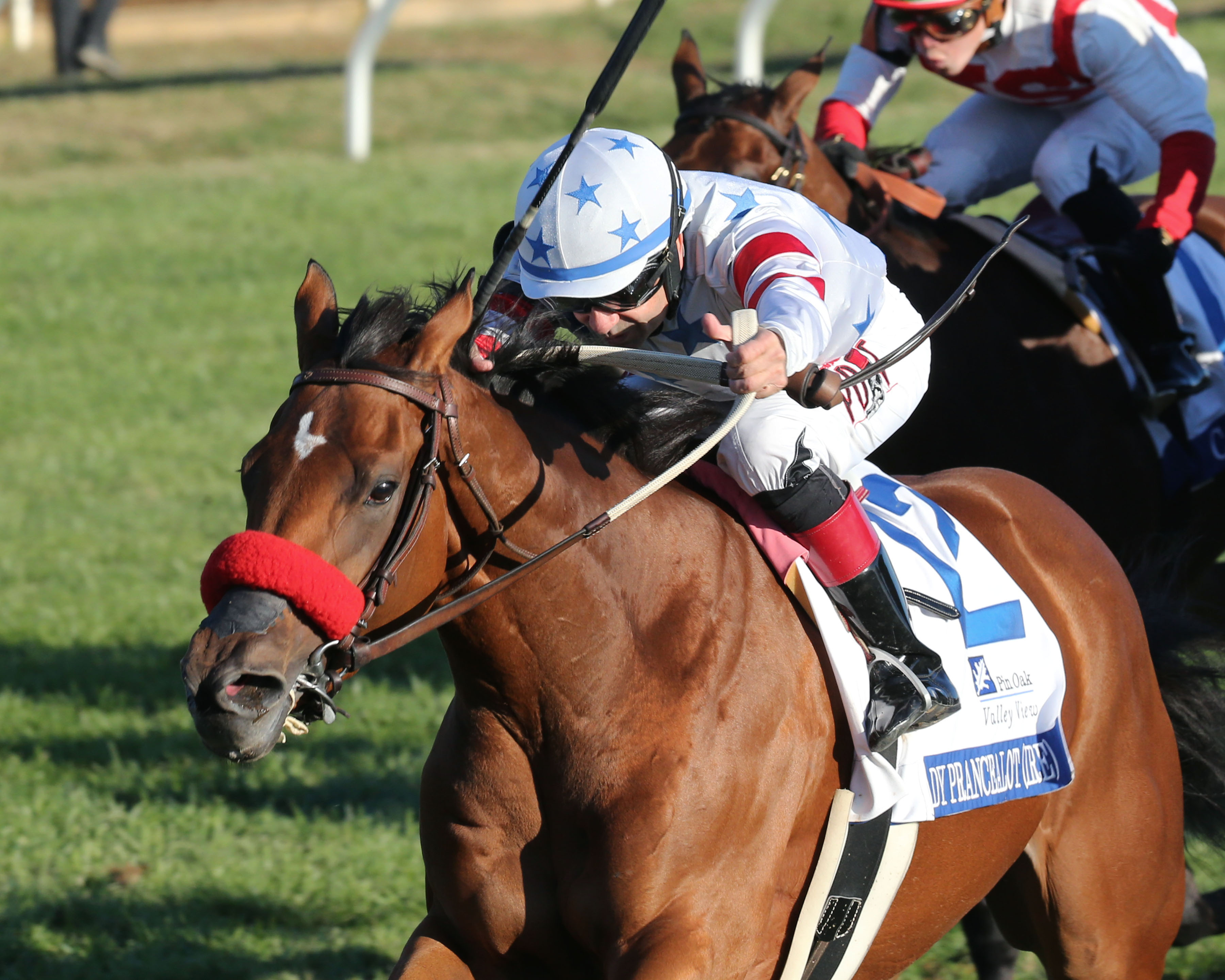 “Lady Prancealot has been unlucky this year,” trainer Richard Baltas said. “She has run big races but never gets any pace to run at. She’s all class and just needs some speed up front to get her back in the winner’s circle at the top level.”

“Lady Prancealot represents a great opportunity to race or breed in 2021,” said Mark Taylor, Taylor Made’s Vice President of Marketing and Public Sales Operations. “Her race potential speaks for itself, and her female family has been consistently producing top-class horses on both sides of the Atlantic for the last 50 years.”

Lady Prancealot began her career in England, where she was first, second or third in her initial three starts. She arrived in the U.S. and was second in her first two races, the Del Mar Juvenile Fillies Turf (L) and Surfer Girl (L) at Santa Anita. Those performances earned the Southern California-based filly a start in the Breeders’ Cup Juvenile Fillies Turf (G1) at Churchill Downs.

In 2019, Lady Prancealot faced a number of division standouts, winning the Honeymoon (G3) at Santa Anita and finishing third to Grade 1 winner Cambier Parc in the Del Mar Oaks Presented by The Jockey Club (G1). Sent to the East Coast, she contested the rich Jockey Club Oaks Invitational at Belmont Park.

During Keeneland’s Fall Meet, Lady Prancealot captured the 1 1/16-mile Pin Oak Valley View (G3) by three-quarters of a length. That performance set her up for a triumphant return home, where she was the 8-5 favorite for the prestigious American Oaks (G1) at Santa Anita and won by a half-length.

This year, Lady Prancealot has competed in Grade 1 and Grade 2 competition in Southern California with a runner-up finish in Del Mar’s John C. Mabee (G2) on Sept. 5 and a third in the aforementioned Rodeo Drive.

“What differentiates her is she has an explosive turn of foot,” Iavarone said. “I love horses that have that style. You think she has no chance, and all of a sudden here she comes out of nowhere. Horses like that really make the heart beat. They’re really exciting. She never not shows up. She puts in her run every single time.”

Lady Prancealot has an international pedigree with winning connections in the U.S. and abroad. Also representing her sire, Sir Prancealot, is Beau Recall (IRE), who recently won the Churchill Distaff Turf Mile (G2) for the second consecutive year to increase her earnings to more than $1.4 million. In August, another daughter, Irish-bred 2-year-old Miss Amulet, took the Sky Bet Lowther (G2) at York in England and is considered a top performer in her division.

Lady Prancealot’s female family features several successful international runners. Among them are Shadwell Stable’s homebred Almanaar (GB), a Group 3 winner in France who became a Grade 1 winner in the U.S. and has competed in the Breeders’ Cup World Championships; and Almanaar’s dam, Baqah, a Group 2 winner in France and a Group 1-placed runner in England.

“Keeneland is very pleased to offer Lady Prancealot in the November Sale, which is a key source of bloodstock for buyers from around the world,” Keeneland President-Elect and Interim Head of Sales Shannon Arvin said. “Lady Prancealot has a special connection to Keeneland through her victory in the Pin Oak Valley View, and we will be excited to see her in the sales ring.”