Vino Rosso and other Keeneland sales alumni McKinzie and Higher Power finished 1-2-3 in the $6 million Breeders’ Cup Classic. Vino Rosso is a graduate of the 2016 September Sale, where owners Mike Repole and St. Elias purchased the Street Sense colt for $410,000 from consignor Glennwood Farm, agent. (Click here for a video of Vino Rosso in the sale ring.)

Bricks and Mortar and Keeneland sales graduate United were 1-2 in the $4 million Breeders’ Cup Turf. Bricks and Mortar delivered on his favoritism by capturing the race for his fifth Grade 1 victory of the year and pushing his career earnings to more than $7 million. Stone Farm, agent, consigned the son of Giant’s Causeway to the 2015 September Sale, where he was purchased for $200,000 by Oaks Bluff Partners. (Click here for a video of Bricks and Mortar in the sale ring.) 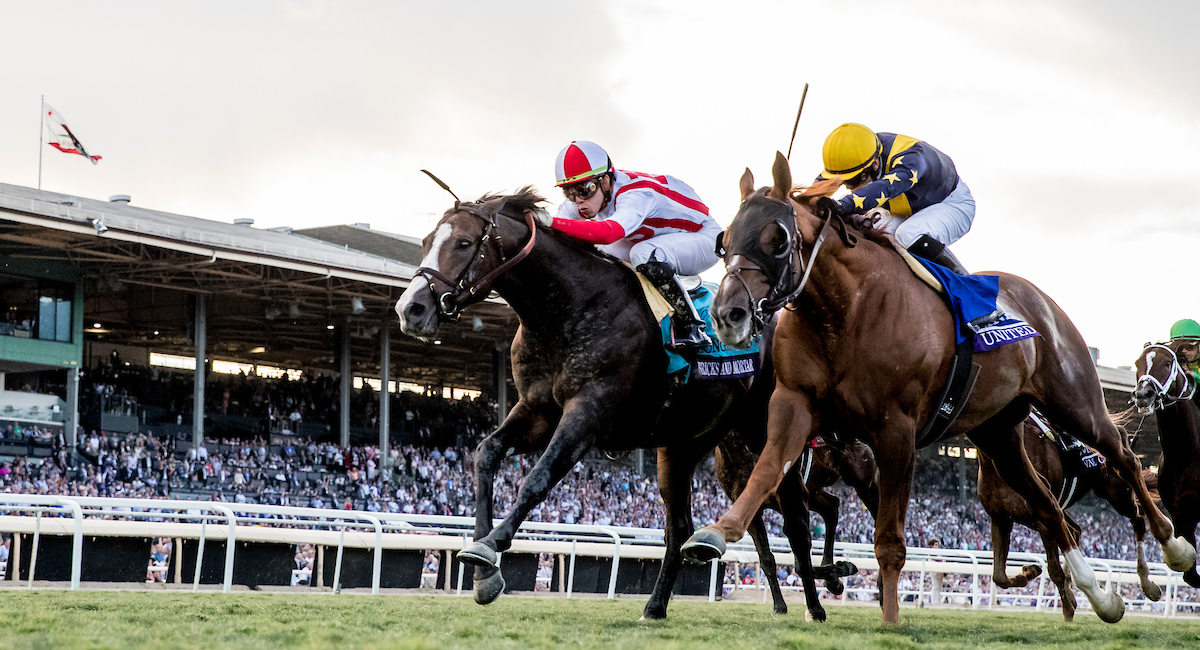 Mitole won his fourth Grade 1 stakes this year when he captured the $2 million Breeders’ Cup Sprint. Chestnut Valley Farm paid $20,000 for the multimillionaire by Eskendreya from the consignment of Eaton Sales, agent, at the 2016 September Sale. (Click here for a video of Mitole in the sale ring.)

Covfefe took the $1 million Breeders’ Cup Filly and Mare Sprint with Keeneland sales graduate Bellafina in second to record her second Grade 1 victory. At the 2017 September Sale, Covfefe, by Into Mischief, was consigned by Gainesway, agent, and bought for $250,000 by Solis/Litt. (Click here for a video of Covfefe in the sale ring.)

On Friday, Structor, a graduate of the 2018 September Sale, won the $1 million Breeders’ Cup Juvenile Turf with Keeneland sales alumnus Billy Batts running second. Gainesway, agent, consigned Structor to the September Sale, where the son of Palace Malice sold for $160,000 to Marquee Bloodstock. (Click here for a video of Structor in the sale ring.)

British Idiom earned an automatic berth into the Juvenile Fillies when she won the Oct. 4 Darley Alcibiades (G1).

On Oct. 5, Uni won the First Lady Presented by UK HealthCare (G1) as a prep for her victory in the $2 million Breeders’ Cup Mile.

Blue Prize, based at Keeneland with trainer Ignacio Correas IV, earned her spot in the Breeders’ Cup Distaff with her second consecutive victory in the Juddmonte Spinster (G1) on Oct. 6.

On Thursday, Nov. 7, Four Wheel Drive’s half-sister Monthly is scheduled to sell as Hip 325 during the second session of Keeneland’s November Breeding Stock Sale. Vinery Sales, agent, consigned the winning 4-year-old filly by Malibu Moon, who is cataloged as a racing or broodmare prospect.