Danny Ramsey’s day starts at 3:30 in the morning. He wakes up, works out, then reports to the track to gallop horses for trainer Kenny McPeek. 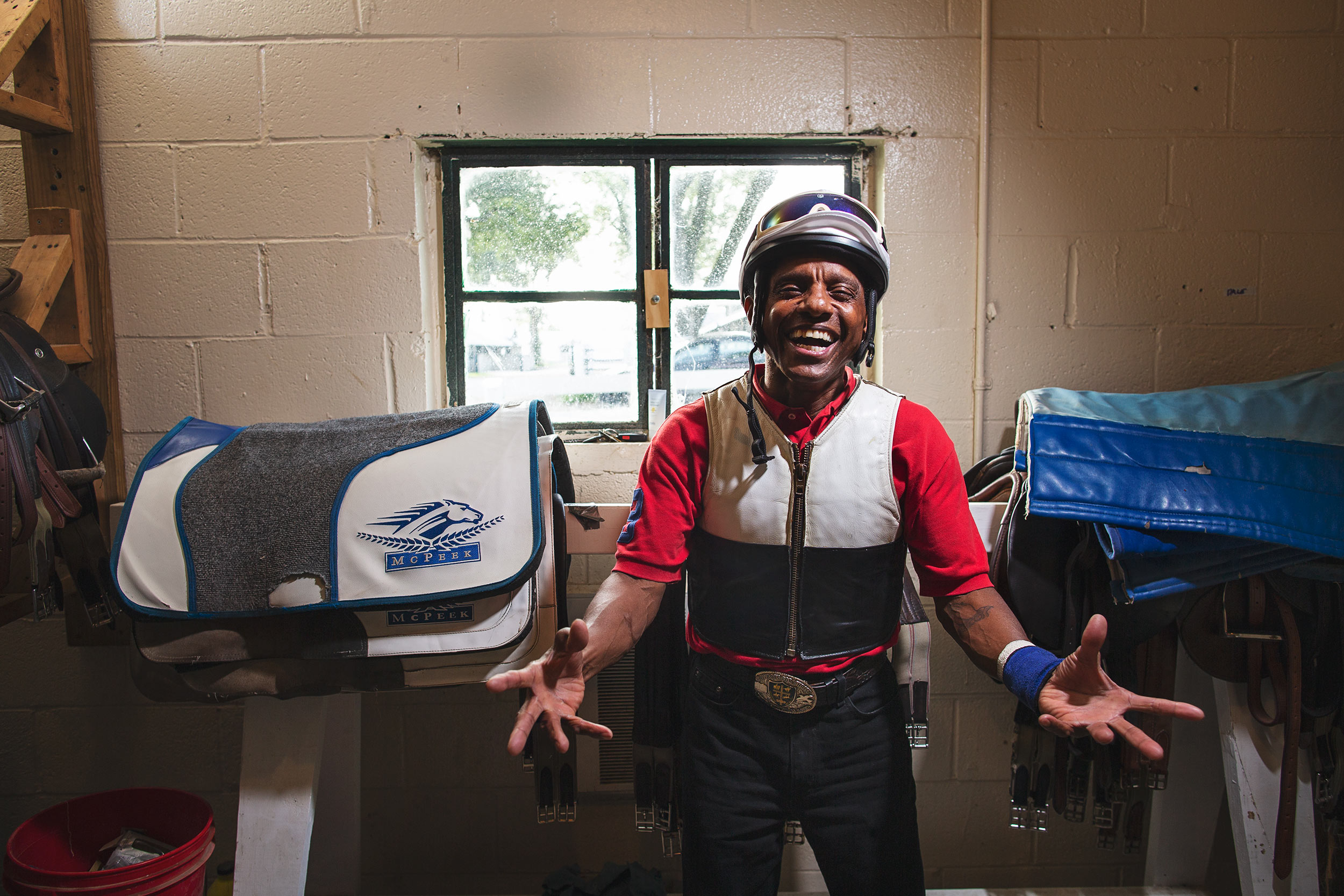 For one thing, he’s a 68-year-old grandfather. He’s been riding since he was seven, growing up in the Bahamas—by the time he was ten, both his parents had died, his siblings had split up among family members, and he was being raised by his older brother. Despite that rough start, he’s one of the most relentlessly positive people you’ll ever meet. His passion for horses shines out of him just as much as his megawatt smile.

“Somebody asked me the other day, ‘If you wasn't riding horses, what you think you would have done with your life?’ And I said, ‘I can’t do nothing else.’ I couldn't do anything else but ride horses. From seven and a half to 68, it's still a passion for me.”

It’s a lifetime on horseback, with a lifetime of stories to match. Danny first saw his wife from the back of a horse, as he was riding into a race. “I told her, ‘I am in love with you. The first time I saw you, my heart just jumped in my mouth.’” They’ve been together for 53 years, with four children and a dozen grandchildren. 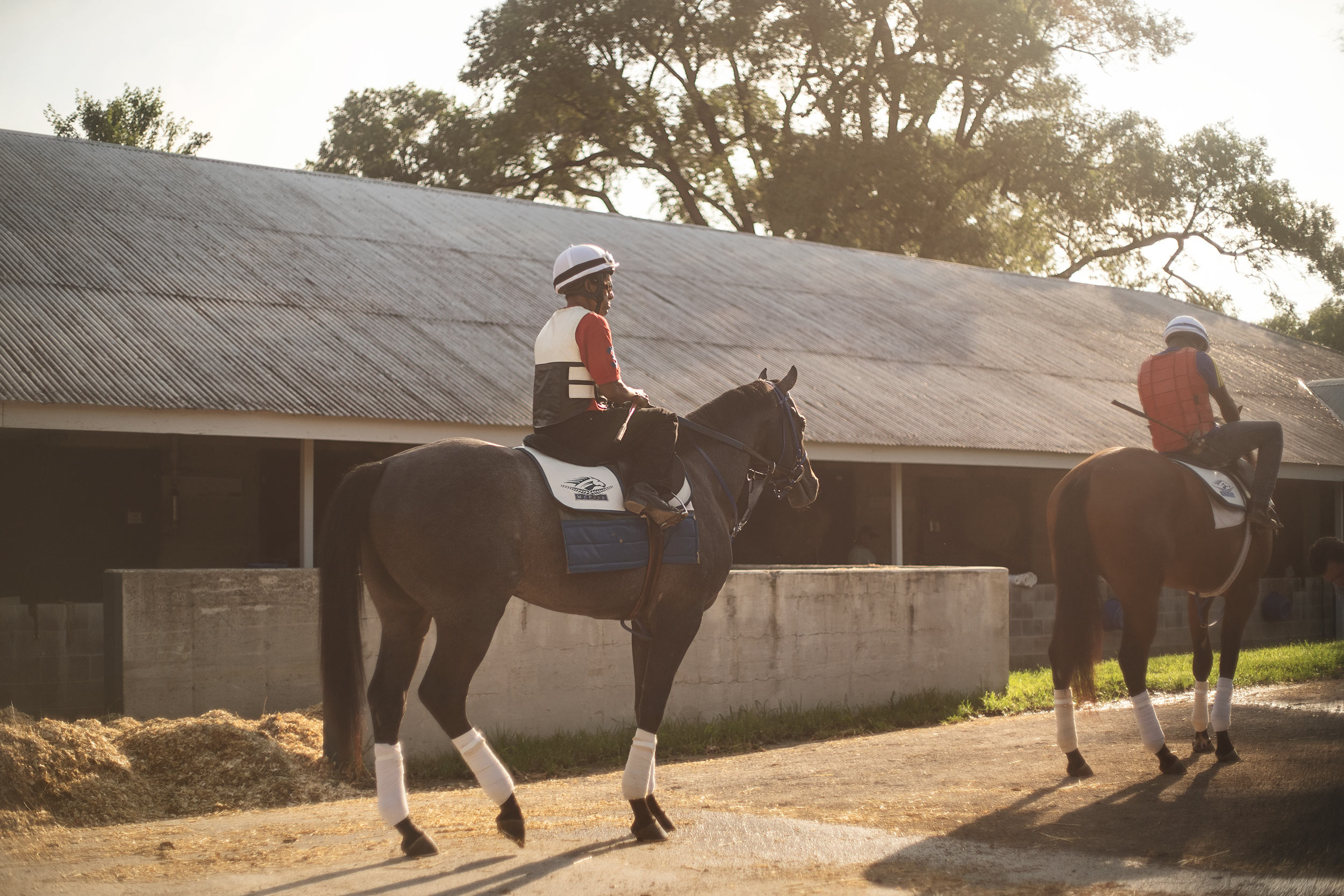 In marriage and in his career, Danny is clearly in it for the long haul. Despite being in the industry for more than six decades, he’s only worked for three trainers: Albert Winick, John Ward and, currently, Kenny McPeek.

When asked what he’s learned from the three trainers he’s worked with, Danny is quick to answer. “Mr. Winick was like a dad to me… I learned great work ethics and character and integrity.”

And from his current role with Kenny McPeek: “Kenny’s like a brother to me. I always tell Kenny, ‘You take wisdom and knowledge and put it together.’ We might lose sometimes, but we’re going to win most of the time.” 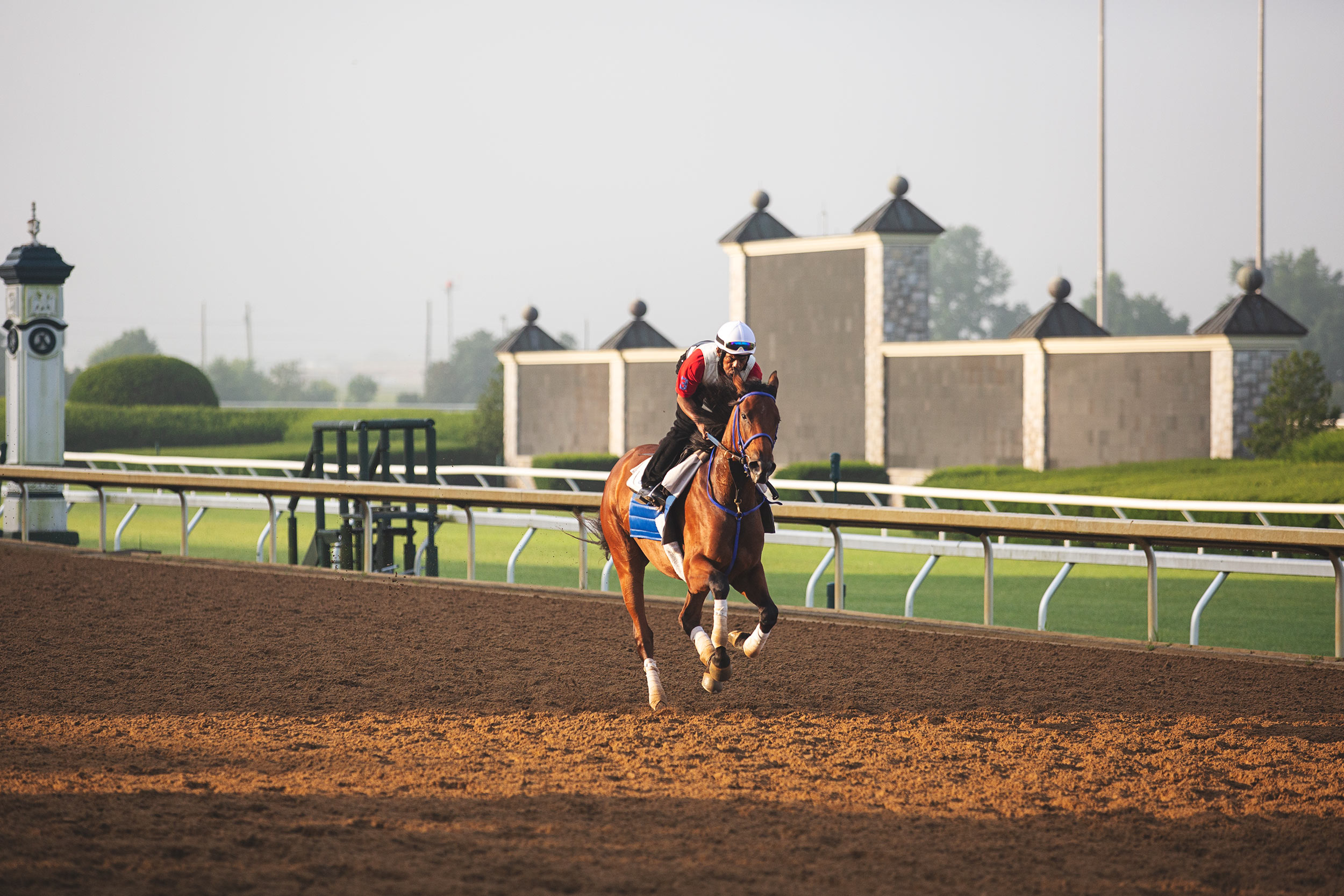 Danny certainly has an uncanny ability to charm just about anyone, human or horse.

“John Ward came in my shed one day and he said, ‘Danny, I've got a problem on the track. Everybody tell me to come ask you to ride Fusaichi Pegasus because nobody can get him to go.’ He throwed everybody that got on his back. So I started riding Fusaichi Pegasus and, believe me, he was more than a handful, but he's never thrown me. And when I got him going, I said, ‘John, I've been on some good horses in my lifetime. He's one of the best.’ And I was there when Fusaichi Pegasus won the Derby. And then Monarchos won it the next year. I thought I was walking on clouds.” 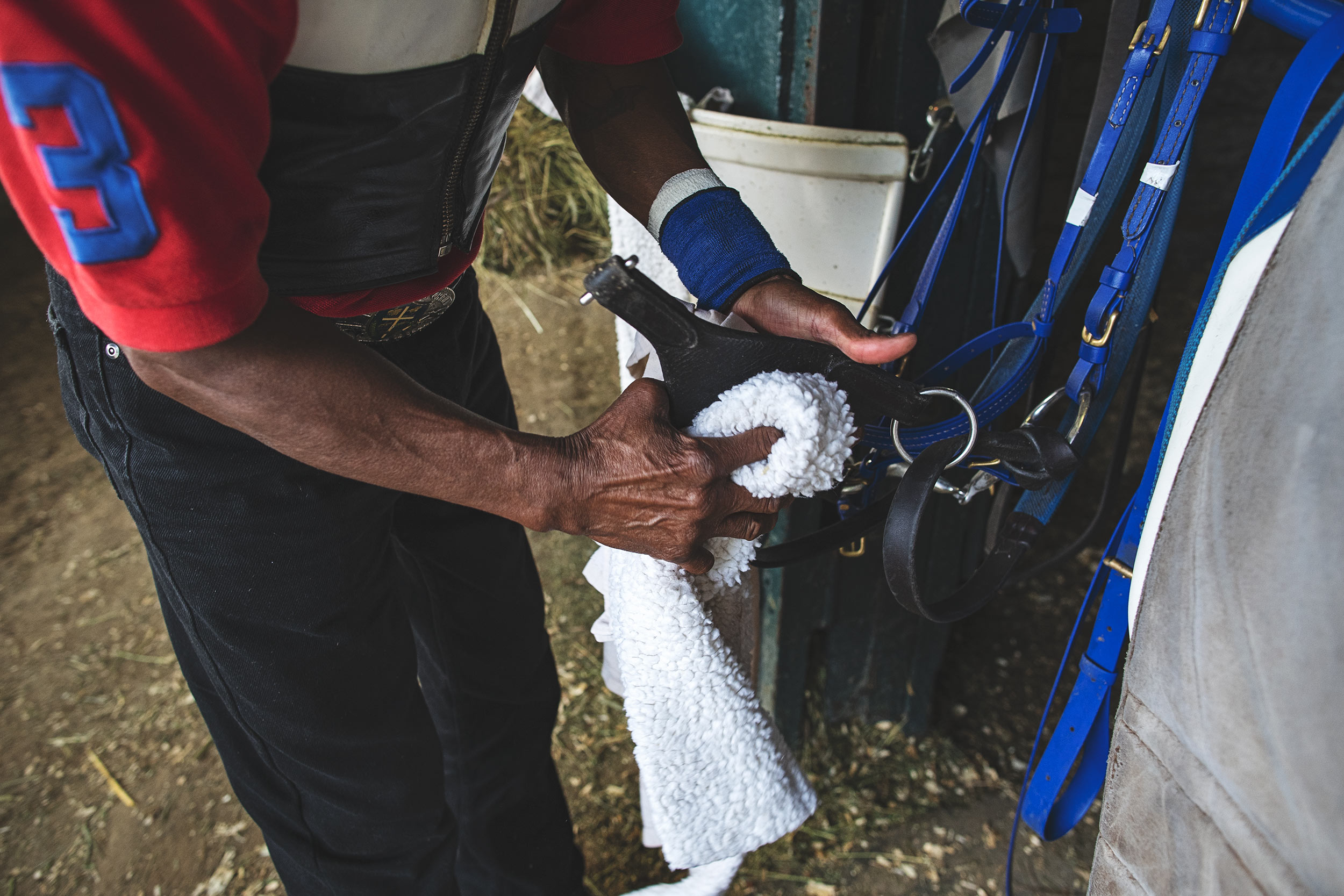 Danny is beloved—by trainers, by coworkers, by his family, and, of course, by the horses he works with every day. He treats everyone he meets with positivity, kindness, and, sometimes, a handful of candy.

“I walk in the barn in the morning and Signalman and Liberty Pursuit, when they hear my voice, they come and put their heads out because they know I’m going to give them candy. They’re just like my kids. And they know I love them and they love me.” 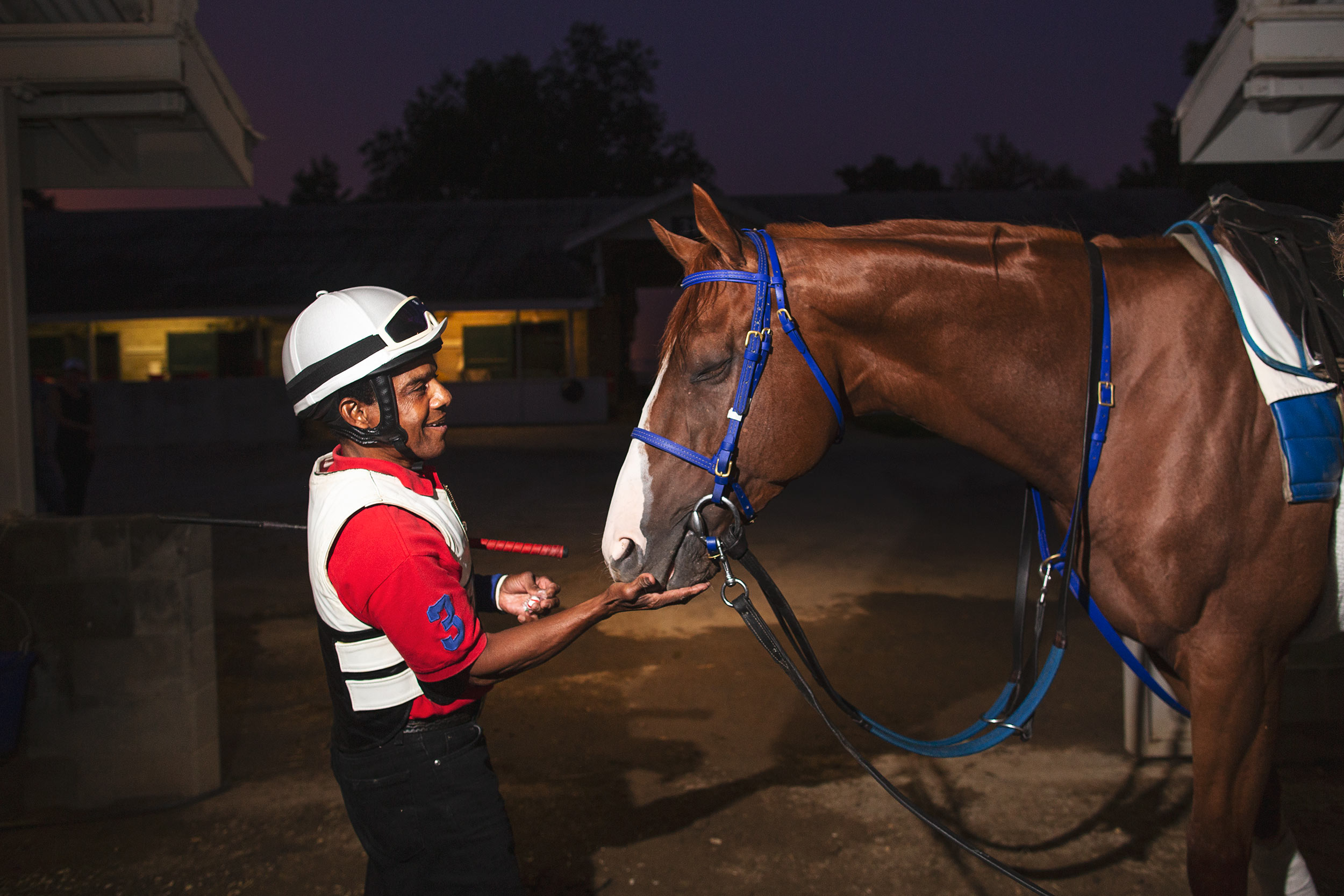 That love keeps Danny going, despite his age. His disciplined commitment to his health—he works out daily, doesn’t drink, doesn’t smoke, doesn’t eat pork or beef, and doesn’t drink soda—has kept him fit and helped him beat cancer. And even as he nears 70, he hasn’t slowed down. In fact, he’s planning on returning to the races, if only briefly, before he retires.

“I miss riding races. I promised my grandkids—I’m serious with this, I’m going to ride for about one month, because I want all the grandkids to see me ride a race again. God willing, I will do it. I mean it. I’m going to do it.”