Brisk trade spurred significant growth in results during Sunday’s sixth session of Keeneland’s September Yearling Sale, marking the close of Book 2. The session was headlined by the sale of an Uncle Mo colt who is a half-brother to 2016 Belmont (G1) winner Creator for $875,000 to the partnership of Ron Winchell’s Winchell Thoroughbreds and Amer Abdulaziz’s Phoenix Thoroughbreds. 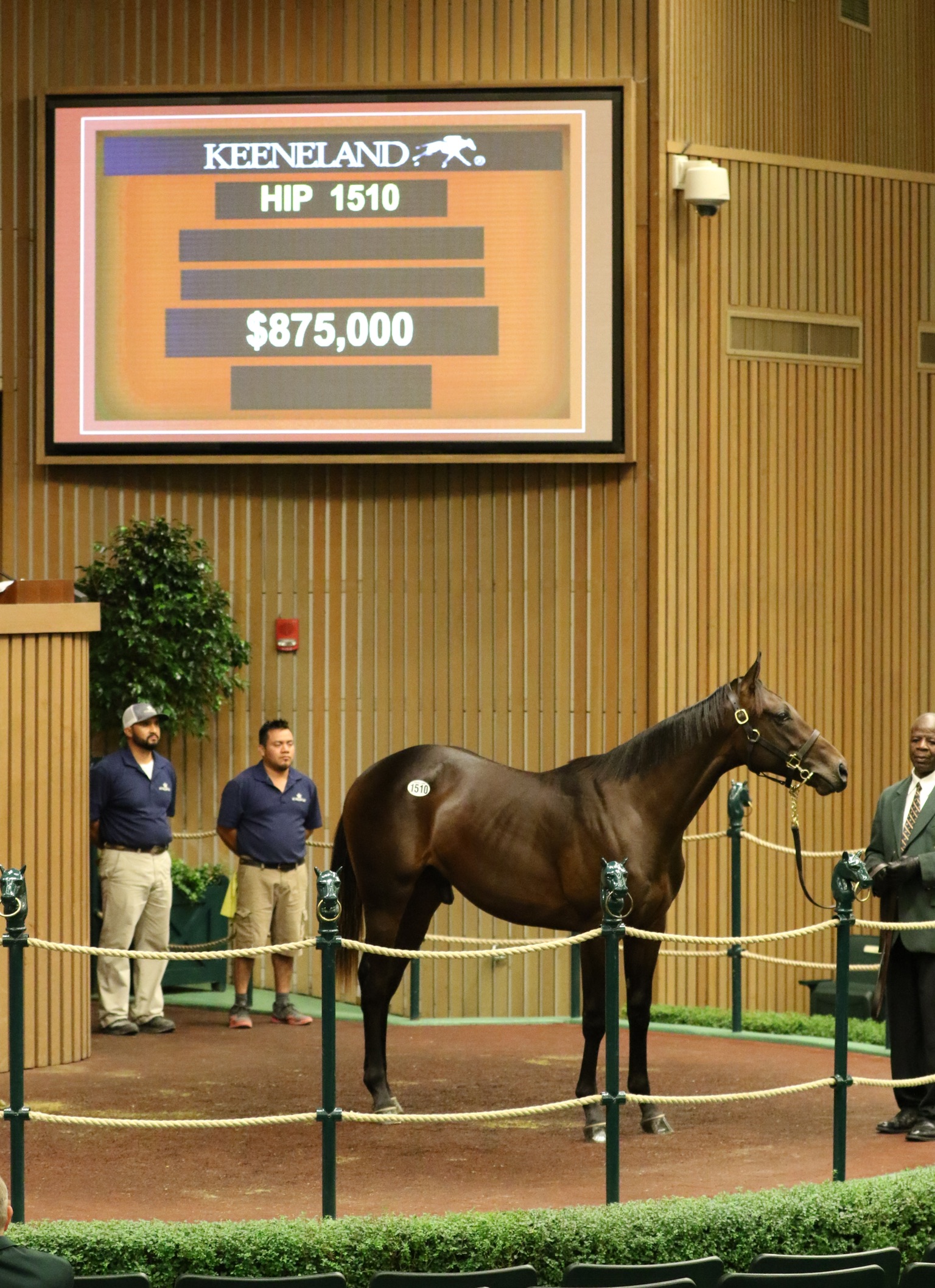 “The trade was very vibrant today, the buy-back rate was down again over last year and all other indicators were very positive,” Keeneland Director of Sales Operations Geoffrey Russell said. “Comments from people were that the barns were very busy this morning, so we hope the sale continues to be vibrant.

“We will probably see a little transition tomorrow in buyers,” he said. “For the buyers during Week 1 to last this long into the weekend shows the quality of the horses has continued from Book 1 into Book 2. People were very busy today buying horses, so that is very positive.”

Consigned by Greg Goodman’s Mt. Brilliant Farm, the session-topping Uncle Mo colt is out of Peruvian champion Morena (PER), by Privately Held.

“I don’t want to say better (than Creator), but this was a really nice foal, really nice Uncle Mo,” Goodman said. “This horse just does it all; there’s just nothing wrong with this horse. And he looks fast; he has a huge heart and there weren’t any knocks on him.

“We thought we were going to put him in Book 2 (before the reformatting of Book 1 was announced). He would have been a Book 1 horse, but I think he stands out here. He’s a great-looking horse.”

“From our perspective, (he was) just an all-around very nice horse,” Winchell said, adding the colt would be trained by Creator’s conditioner, Steve Asmussen. “This sale has been very strong. I have been very good at getting outbid.”

A colt from the first crop of 2015 Triple Crown winner American Pharoah who is a half-brother to two-time Breeders’ Cup winner Secret Circle sold for $800,000 to Zayat Stables, which bred and raced American Pharoah. Consigned by Warrendale Sales, agent for Stonestreet Bred & Raised, the colt is out of the stakes-winning Dixieland Band mare Ragtime Hope. He is the first offspring of American Pharoah acquired by Zayat Stables at the September Sale.

“His pedigree is a stallion’s pedigree, and he kind of reminded me of American Pharoah,” said Justin Zayat, President and CEO of Racing and Bloodstock for Zayat Stables. “He’s kind of plain-looking, old brown wrapper horse, and he had the class. We’re going to be sending him to (American Pharoah’s trainer) Bob Baffert in the future and hopefully he can be a Grade 1 winner for his dad and his first crop. We’re very excited about him and excited to take him home.”

Zayat said he has been thrilled with the reception of American Pharoah’s progeny at the September Sale. To date, 44 horses by the stallion have sold for $19,205,000. They include a colt for $2.2 million, a colt for $1.4 million and a filly for $1.2 million.

“They’re all very cool, level-headed horses, and they’re selling like hot potatoes – it’s absolutely insane,” Zayat said. “It even exceeded my expectations. I knew it was going to be exciting but to see the averages where they are and all the million- and multimillion-dollar horses, it’s really unbelievable. So we’re enthusiastic, we’re excited.” 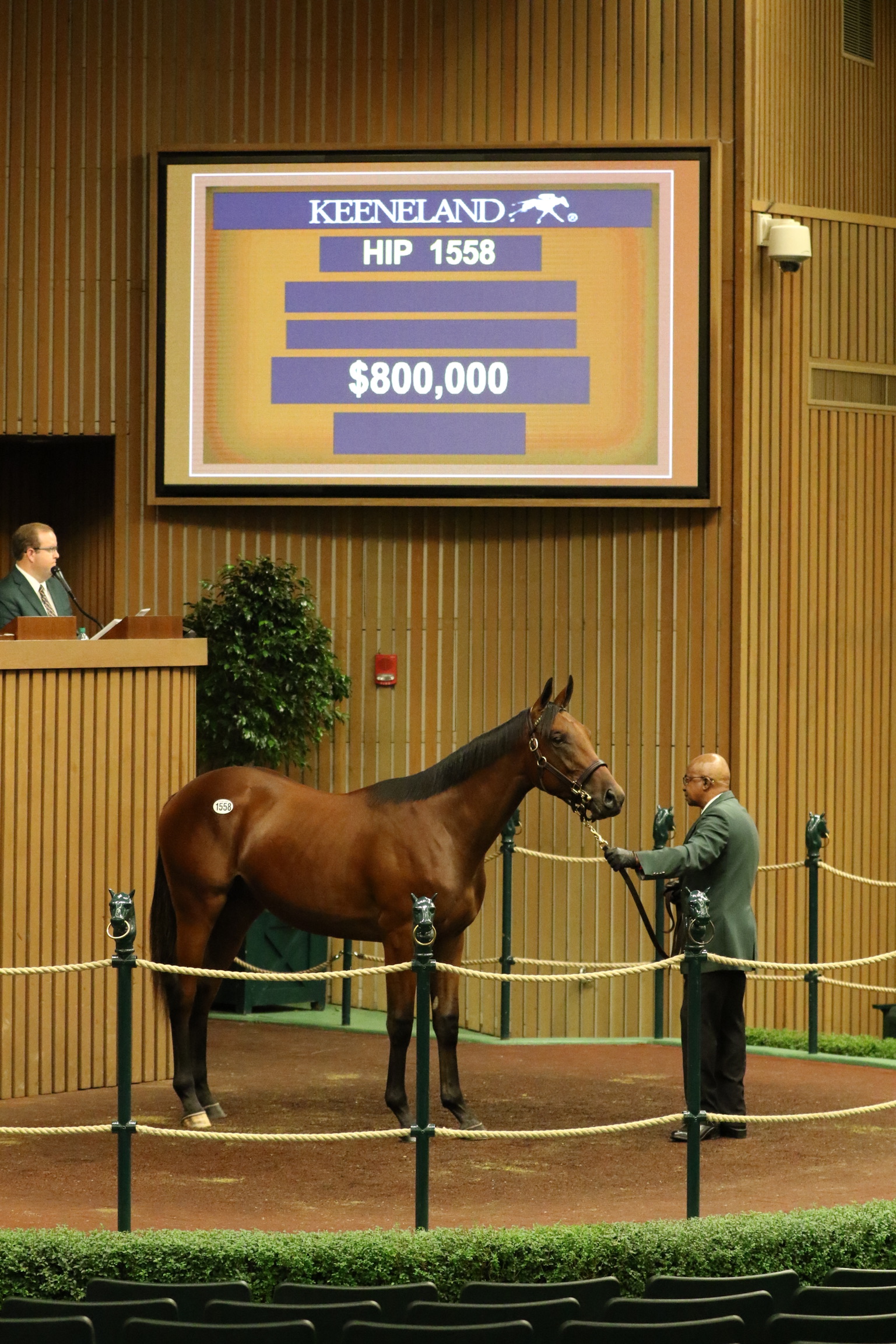 Mt. Brilliant Farm also consigned a colt by Empire Maker who sold for $540,000 to Baoma Corporation. Out of the winning Lemon Drop Kid mare Apologize, a full sister to multiple Grade 3 winner Aurelia’s Belle, the colt is from the family of champion Althea and Grade 1 winners Ketoh and Aldiza.

On behalf of Zedan Racing Stables, Baffert paid $500,000 for a colt by Tiznow consigned by Four Star Sales, agent. The colt, out of the Elusive Quality mare Im So Fine, is a half-brother to Grade 3-placed My Johnny Be Good.

“That was a great sale,” Four Stars Managing Partner Kerry Cauthen said. “He is a Tiznow who looks fast and has tons of leg but not the kind of big horse you think will just plod along. He looks like he can cover the ground, cover it fast and keep on going. Obviously, the (bidders) thought the same thing. Bill Casner (husband of breeder Susan Casner) raised this horse in Texas. It is a great win for a great client.

“We put our horses (in the session) where we think they have value,” Cauthen added. “We do that months in advance (of the sale). He is not a horse we strategically put here. These horses change and mature (as the sale approaches) and this one certainly matured the right way.”

The leading consignor Sunday was Taylor Made Sales Agency, which sold 31 horses for $3,671,000.

The September Sale continues through Sunday, Sept. 23, with the remaining seven sessions beginning at 10 a.m. ET.

The entire sale is streamed live at Keeneland.com.