Momentum continued into Wednesday’s third session of the Keeneland November Breeding Stock Sale, generating the top prices of $500,000 paid by Coteau Grove Farms/Cary Bloodstock, agent, for the broodmare Contributing, in foal to Speightstown, and $435,000 from Baccari Bloodstock for a weanling colt from the first crop of undefeated 2018 Triple Crown winner Justify.

“Overall, the energy today was really good,” Keeneland President-Elect and Interim Head of Sales Shannon Arvin said. “We saw a lot of competition for foals. Some new buyers and many of the same buyers from the first two days continue to participate. We would love to see stability of the market throughout the sale, similar to what we experienced during the September Yearling Sale.

“It will be a different level of the market moving forward,” he said, “but if we can capture the vibrancy of today and extend it into tomorrow and the next day that would be great.”

“I bought one Medaglia d’Oro mare in foal to Speightstown earlier, so I figured why not hit a double?,” buyer Andrew Cary said. “It’s an awesome pedigree and Speightstown is showing again how awesome he is, with a horse like (undefeated track record-setting stakes winner) Nashville. (Contributing’s) sister produced an Oaks winner. She’s gorgeous and she could run. To me she’s the whole package.” 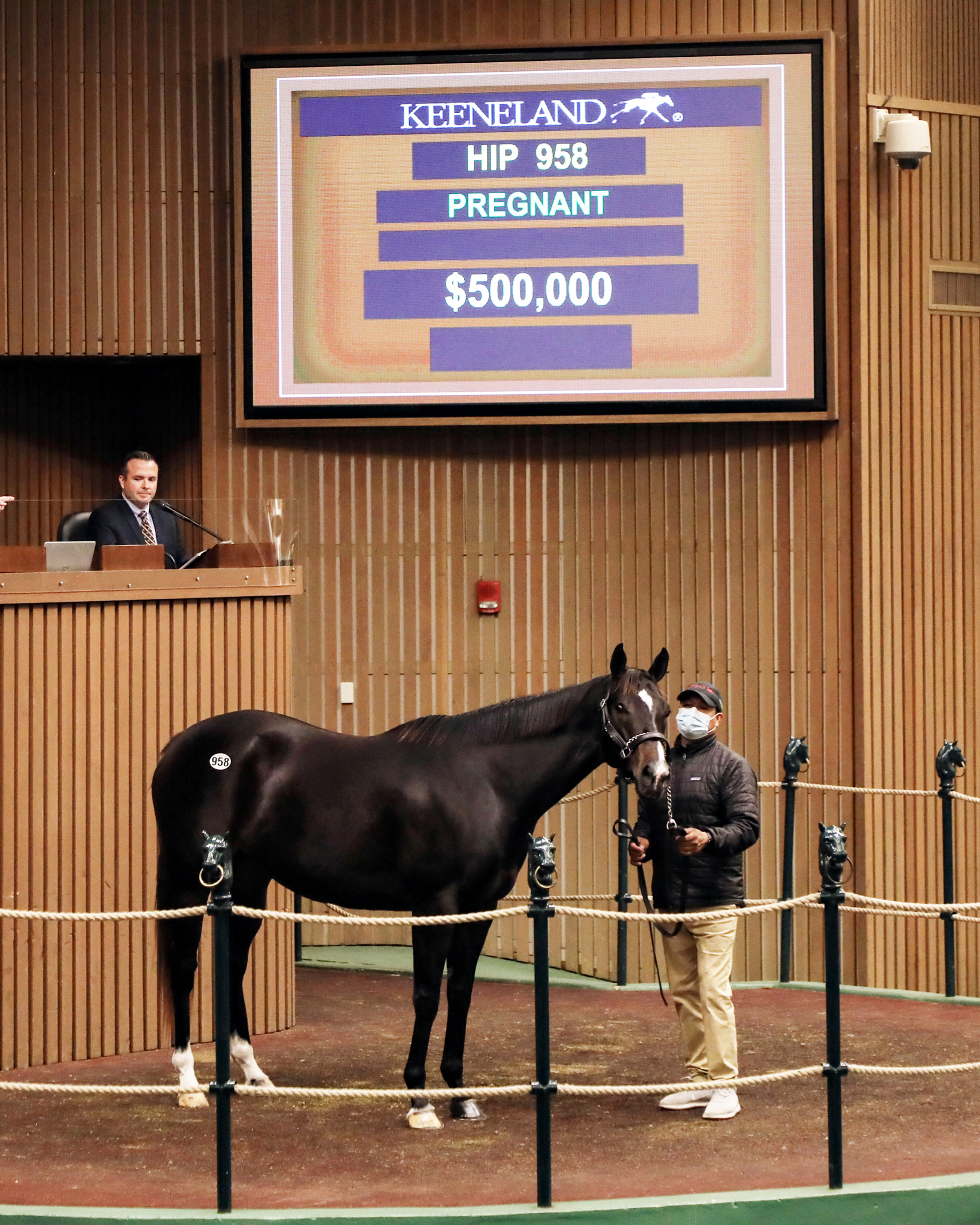 The $435,000 weanling, consigned by Elm Tree Farm, agent, is a half-brother to multiple Grade 2 winner Pretty N Cool and is from the family of Grade 1 winner Sean Avery. His dam is Stayclassysandiego, a stakes-placed daughter of Rockport Harbor.

“I’ve been looking for a really good Justify, and he has a lot of female pedigree, plenty of size and plenty of strength,” buyer Chris Baccari said. “Anybody that looks at him when he goes to be resold will see he looks like he has plenty of bone and looks like he can take a lot of training.

“(The weanlings by Justify) are very good. The public is going to support him now and his yearlings. He was a very good racehorse and I’m a big fan. (This colt) reminds me of his sire. He has a lot of raw strength like he did. The mare is a good producer, and that is what I’m looking for. That is what determines the value to me. He had a good physical, but he has the pedigree to go with it.”

Jody Huckabay, who owns Elm Tree with his wife, Michelle, was pleased.

“This is (breeder) Nancy Shuford’s horse, and I think we are pushing 25 years doing business together,” he said. “He was a nice colt and we had the right people on him, but we certainly did not expect that. In this market with everything going on, we are blessed to have the opportunity to sell a horse like that.”

Colts by Justify have been the most expensive weanlings of each of the first three sessions of the November Sale, starting Monday with a $600,000 purchase (a price equaled by a colt by 2015 Triple Crown winner American Pharoah) and a $475,000 buy on Tuesday.

On Wednesday, Justify also sired a colt sold for $375,000 to Michael Fowler. Consigned by Stuart Morris, agent, he is out of Emily B, by Smart Strike, and from the family of Grade 1 winners Awesome Maria, Pretty Discreet, Discreet Cat and Discreetly Mine.

“I tend to go earlier now for (weanlings) as opposed to waiting for them to be yearlings,” he said after buying the Good Magic colt. “You take more risk, but you are not spending the same amount of money. You might get two or three shots on goal for what you’d be paying at the yearling sales.”

Paramount Sales, agent, consigned the son of Into Mischief, who is a half-brother to multiple Grade 3 winner Awesome Slew and stakes winner He’s Bankable. The colt is out of the stakes-winning Seeking the Gold mare Slewfoundmoney.

“That was a gorgeous Into Mischief,” said Best, who has been successful racing offspring of the stallion. “Beautiful horse – beautiful walk. You could’ve told me he was by any other sire and I would’ve bought him. He just looked so, so good.”

Paramount Sales led all consignors during the session, selling 24 horses for $3,285,000.

Another weanling sold for $400,000 when Stonestreet Stables purchased a filly by Mastery who is a half-sister to undefeated Nashville, winner of Saturday’s 6-furlong Perryville at Keeneland in track-record time. Warrendale Sales, agent, consigned the filly, who is out of Veronique, by Mizzen Mast, and from the family of Kentucky Derby (G1) winner Giacomo, Grade 1 winner Tiago and Grade 3 winner Stanwyck.

Stonestreet also paid $375,000 for a filly from the first crop of multiple Grade 1 winner City of Light consigned by Eaton Sales, agent. Out of the stakes-winning Flatter mare Cabana, she is from the family of Grade 2 winner Funny Proposition and stakes winners Mr. Importance, Home of Stars, Humorous Miss, Artistic Star and Jazz Quest.

The $360,000 colt by Good Magic sold to Larry Best is a half-brother to Grade 2 winner Lovely Bernadette and from the family of Breeders’ Cup winners and millionaires Shared Account and Sharing. Consigned by Bedouin Bloodstock, agent, he is out of the winning Bernstein mare Inlovewithlove.

“I am trying to diversify with different sires,” Best said. “I bought a Mastery, an American Pharoah filly, etc. This one is by Good Magic and was good looking. Physically, this was about as good as you are going to get for a weanling. I expected to get him for $250,000 or $300,000. I had to go a little higher, but the right people were on it.”

The November Sale continues Thursday with the start of the two-day Book 3. The auction continues through Wednesday, Nov. 18 with all sessions beginning at 10 a.m.

The entire sale is streamed live on Keeneland.com.