After a one-day break at the conclusion of a blockbuster Week 1 of Keeneland’s September Yearling Sale that produced gross sales exceeding $216 million, the momentum continued Saturday led by the sale of the Uncle Mo colt Wall Street Lion for $1 million. The colt, the 27th million-dollar horse of the 2018 September Sale, is the first seven-figure sale of the auction’s fifth session since 2011 and contributed to robust increases in session results. 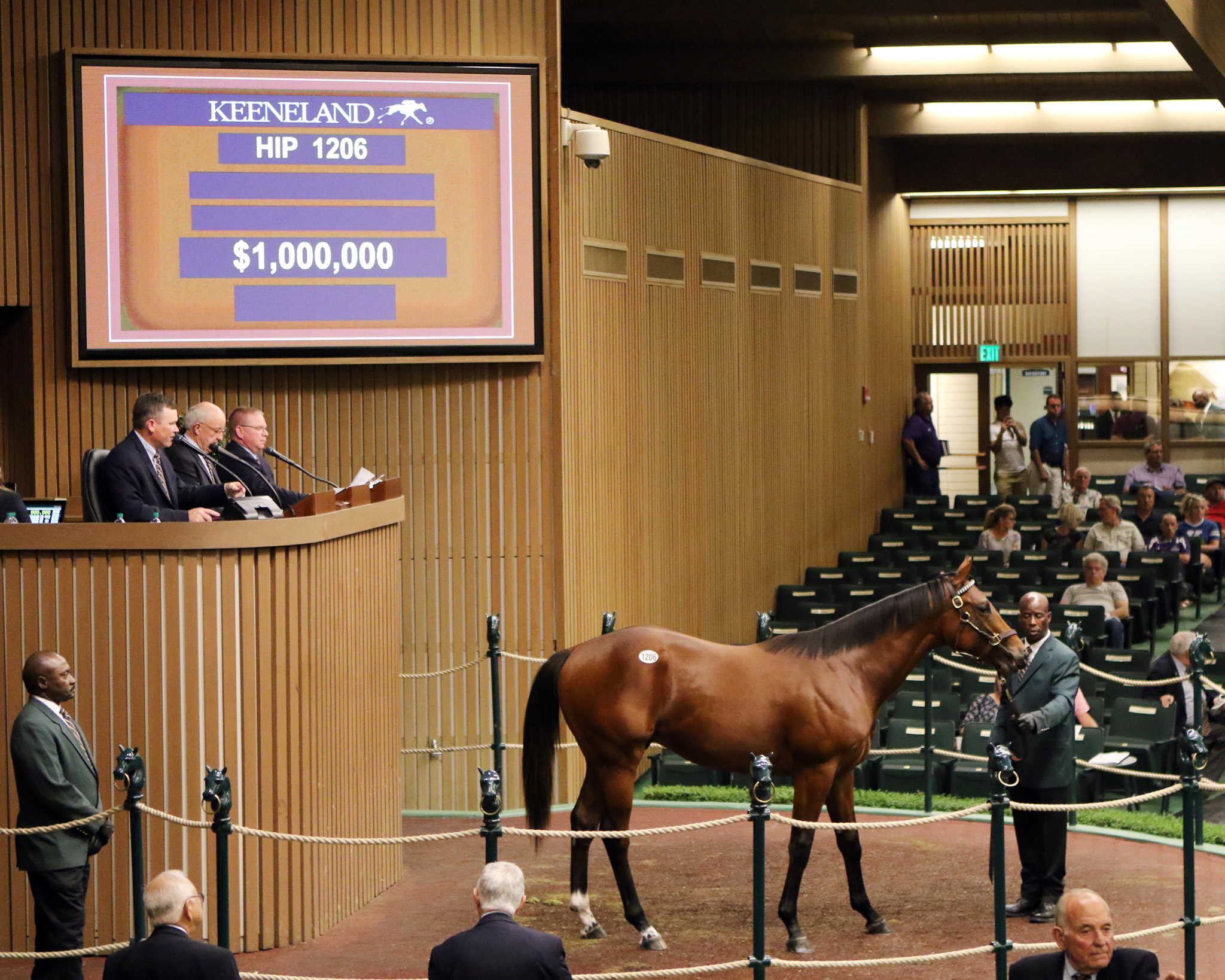 “Today was an excellent session, very strong in all numbers,” Keeneland Director of Sales Operations Geoffrey Russell said. “When you increase the average and the median by how much we did and still have a very low buyback rate (22 percent), it shows the strength of today’s session. It started off very strong and finished very strong too; it was all go all day. Auctioneers said it had a great feel with people bidding left, right and center.

“Book 2 over Saturday and Sunday is a very important book, because consignors like to sell right after the break,” Russell said. “We have always stressed to people that this should be a very strong conformation book because people have plenty of time to look at the yearlings. Strong physicals are what sells. And today really was a phenomenal session.”

“He was really well received and was extremely popular,” Lane’s End Director of Sales Allaire Ryan said. “He exceeded our expectations, but we did have high hopes. We wanted him to stand out, and we wanted to put him in the right spot. That goes with our strategy overall for this sale. We really streamlined what we put in Book 1. We wanted to strengthen what we put in (later books) and that will have a trickle-down effect within our own consignment. We are glad the strategy is working out. (Breeder Wygod Equine) has a lot of this family so they thought this was a good opportunity to sell and we are glad it worked out.”

“Just a gorgeous athletic colt,” China Horse Club’s Mick Flanagan said about the purchase. “He’s by a fabulous stallion in Uncle Mo; there’s a lot of good blood on the page. There’s Giant’s Causeway, Street Cry (IRE), even a bit of Arch on there, so he’s got a mix of all those good stallions. His dam was very, very good, obviously. She could run a bit, too, so we’re very happy to get the colt.

“It was probably a little more than we wanted to give for him but we were very, very high on him, and that’s what the good horses are making so that’s where we had to be,” Flanagan added. “It seems like a good sale; it feels like a good sale. There’s lots of people still looking to buy, and there are good horses out there.”

West Bloodstock/Robert and Lawana Low paid $850,000 for the second high-seller, a colt by leading sire Tapit. Consigned by Gainesway, agent, the colt is out of the stakes-placed Giant’s Causeway mare Flores Island, a half-sister to Grade 2 winner Annual Report and a full sister to stakes winner Giant Payday. The colt is from the family of champion Heavenly Prize and Grade 1 winners Furlough, Dancing Spree, Fantastic Find, Good Reward and Oh What a Windfall.

“Another big purchase for them,” Jacob West said about the Lows. “We had gotten outrun on some big colts in Book 1, and just kind of saved our powder for this colt in Book 2 and were pretty happy to get him. Breeders keep breeding quality products and bringing them to market, and you have to pay for it.”

Mayberry Farm went to $800,000 for the session’s top-priced filly, Sense of Time, by Street Sense. Consigned by Lane’s End, agent, she is out of the Unbridled’s Song mare Test of Time and from the family of Grade 1 winners To Honor and Serve and Angela Renee and Japanese Group 1 winner Mozu Ascot.

“That was as lovely a filly as walked up here,” bloodstock agent David Ingordo said. “For the program we’re trying to do, she’s a long-term investment. Not only does she look like she’s going to win a bunch of races – she’s such an athlete – she’ll have a great pedigree to be a foundation mare.

“The market is strong,” Ingordo added. “There’s this backwards pressure. In Book 1 we were bidding strong and underbidding million-dollar horses at $800,000, $900,000, $925,000. We’re in there firing away, so we get pushed back (to bidding on horses in Book 2). We got some bought; we found some diamonds in the rough, some horses that for whatever reason maybe were a little too far forward (in the catalog), and that was easier than trying to buy some of the higher-end horses.

Larry Best’s OXO Equine paid $750,000 for Spanish Mischief, a colt by Into Mischief.

Consigned by Taylor Made Sales Agency, agent for Alastar Thoroughbred Company, the colt is out of the Empire Maker mare Spanish Empiress and from the family of champions Gold Beauty and Sky Beauty, English Horse of the Year Dayjur and Grade 1 winners Pleasant Home and Tale of Ekati.

“I think it’s a good price, but I think it was just a great individual,” Duncan Taylor, President and CEO of Taylor Made, said. “Into Mischief can throw fast horses, but this horse looks like he could run two turns. (He’s out of) an Empire Maker mare, so I think that’s going to add the distance. You could buy this Into Mischief and think you could be competing for the Kentucky Derby (G1).

“(The market) is still strong (after four days of Book 1). (Good prices) ought to continue. There’s plenty of demand, a lot of people still looking at the barns so I think it’s going to be good.”

A filly by Pioneerof the Nile from the family of Horse of the Year Point Given sold to Barbara Banke’s Stonestreet Stables for $700,000. Consigned by Taylor Made Sales Agency, agent, the filly is out of the Grade 2-placed Tiznow mare Live for Now, a half-sister to Point Given.

“Barbara (Banke) was looking for a really nice filly all week and kept getting outbid for some of those, so she decided to take a swing,” bloodstock agent John Moynihan said. “She looks like she’ll be really fast and the Casners who bred her raise a really good horse. (She was bred by Susan Casner, wife of Bill Casner.)

The 13-day September Sale continues through Sunday, Sept. 23, with all sessions beginning at 10 a.m. ET.

The entire sale is streamed live at Keeneland.com.