Enthusiastic bidding for Thoroughbred racing prospects continued Wednesday during the third day of the Keeneland September Yearling Sale when yearlings by young sires lit up the bid board with colts from the first crops of multiple Grade 1 winner City of Light and 2018 Triple Crown winner Justify fetching $1.7 million and $1.55 million, respectively. Young sires were represented by eight of the 10 highest prices of the session. 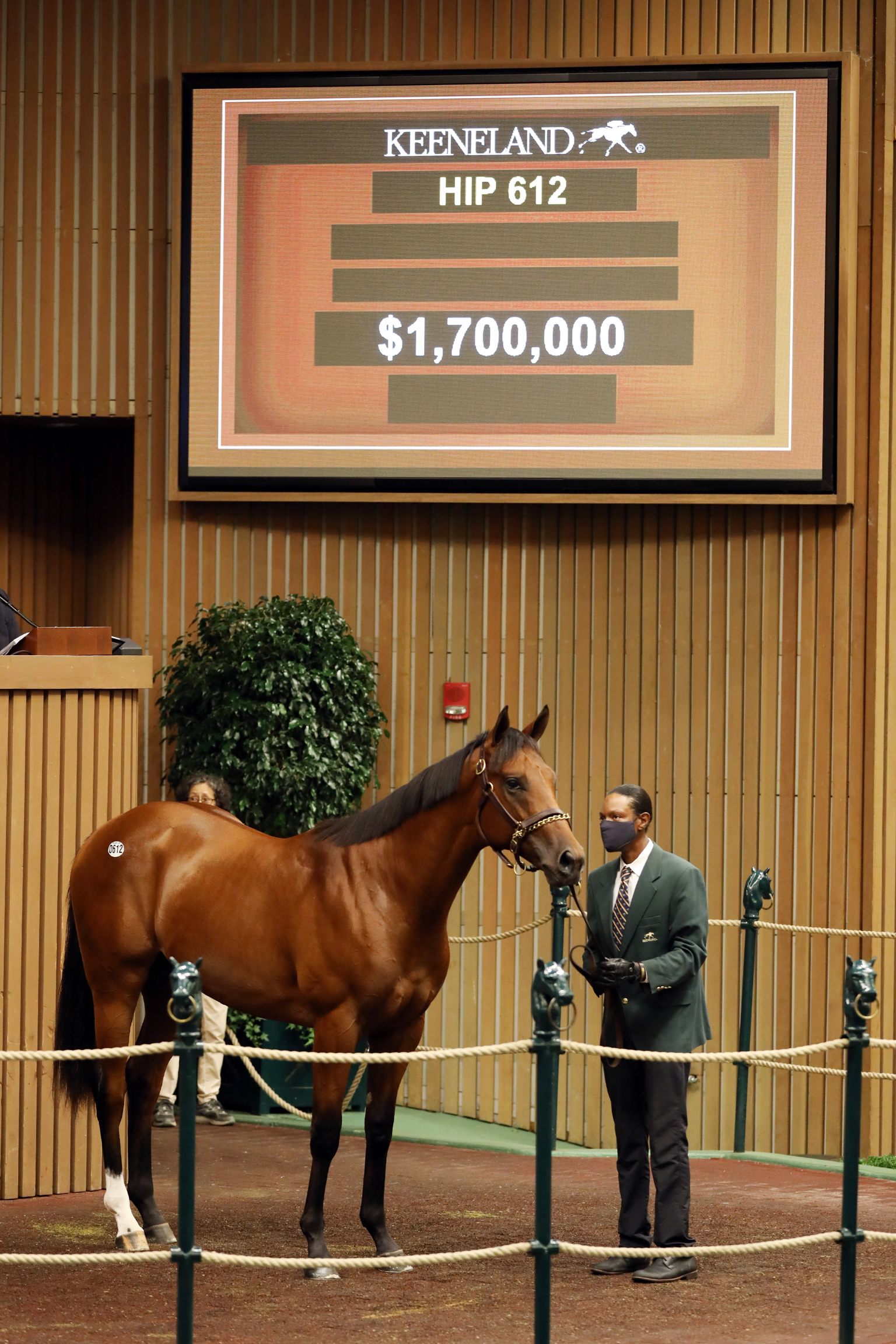 A total of 13 yearlings have sold for $1 million or more during the first three days of the September Sale.

“That was amazing – one of the best sale days we have seen in a while,” Keeneland Vice President of Sales Tony Lacy said. “Every time you picked your head up, it was another $500,000, $600,000 yearling. There was a lot of optimism and a diverse group of buyers. We had a lot of end users and new money. It was really positive with a great vibe around the grounds. Today should lead to an exciting day tomorrow.

“We found a lot of consistency where the momentum of Book 1 flowed into Book 2 – a confluence of positive things happening all the way through,” Lacy continued. “A lot of people have not been able to buy a horse yet. There is a pent-up demand. They are not going to go home until they fill their orders.

“We call the September Sale the world’s yearling sale and it really is. Everybody has been in play.”

“The highlight today was the depth of the market,” Keeneland Director of Sales Operations Cormac Breathnach said. “Apart from the two million dollar-plus horses, we had 26 others that brought over half a million and they went to a broad base of buyers, particularly domestic demand in today’s case. We’ve seen the new money that we saw in credit applications go to work today. People are excited about what they’re buying and they’re excited about sticking around. It’s a tremendous day.”

Rosilyn Polan’s Sunday Morning Farm of Woodford County, Kentucky, consigned the $1.7 million colt, who is out of the Tapit mare Anchorage.

“I have always loved this colt,” said Polan, who bred 2021 Sanford (G3) winner and Hopeful (G1) runner-up Wit and sold him for $575,000 at last year’s September Sale. “I have always known he was special, and I knew that people would like him, but usually people like a horse for a certain price. Nobody can ever dream of a million dollars.

“I am so proud of my horse and my crew,” added Polan, who consigned three horses to this year’s September Sale. “The mare is my favorite mare – of course anybody would say that now. (This colt) is just a fabulous horse.”

Asked how she would celebrate the achievement, Polan said, “Clean stalls, turn out yearlings, clip ears, feed, go to bed early, get up and ship (my horses) tomorrow (to Keeneland). That’s the best part of it, is that it keeps you real.”

Bill Farish of Woodford Racing said he likes City of Light “a lot. (The yearling colt) is a stunning individual, very strong, good bone colt. A rare type individual. It was a full price, but I knew we were going to have to stretch to get him.”

The colt is the first acquisition for the Woodford, Talla, West Point partnership. On Tuesday, Woodford and West Point purchased the $1.6 million session topper, a Quality Road colt who is a half-brother to Grade 1 winner Girvin and classic-placed Midnight Bourbon.

Talla Racing and West Point Thoroughbreds acquired the $1.55 million Justify colt who is from the family of champion Wait a While. A half-sister to stakes winner Feeling Mischief, he is out of the stakes-winning Latent Heat mare True Feelings.

“We have a team together: (trainer) John Sadler, (agent) David Ingordo and West Point Thoroughbreds,” Mike Talla said. “We had had our eye on two or three of them and kept getting outbid. So finally, we had to make a stand somewhere. We really liked this one, so we went in for him. We’ll know next year if we made a mistake or not. Let’s talk next summer.”

The purchases were especially memorable to Terry Finley, West Point’s Founder and President.

“After 30 years, I think about when I first came here, and I thought it was the best thing in the world when we bought a horse for $12,000,” Finley said. “And now, we get a shot to buy horses like this with great partners and great people. It’s just incredible. We’ve worked hard to evolve, and we’re just part of a team. We like to think we’re good partners, and we bring on good partners. We all do our own thing, and it’s a special thing. These horses are very hard to buy, and I just couldn’t do it without an immense amount of support and people who are in a position to take chunks.

“You just start dreaming with these kind of horses, and just hope you get lucky.”

Stonehaven Steadings consigned the $1.55 million  Justify colt and 10 hips later sold a $750,000 filly from the first crop of Grade 1 winner Mendelssohn out of Grade 2 winner Wasted Tears, by Najran, as agent for Bart Evans and Stonehaven Steadings.

“Probably the most exciting thing I have experienced in this business,” Stonehaven Steadings Director of Bloodstock and Client Development Aidan O’Meara said about the sales. “We were high on them all along. There was a huge update for the filly. The (Justify) colt has been one of our top two colts all along, but he really blossomed in the last two months. He was a class act all the way through. He improved every day and you could feel the momentum building with the serious players getting involved.”

“(Right now) I am flabbergasted and shocked and overwhelmed about the whole thing. We certainly weren’t expecting those kinds of results. We had aggressive reserves but they blew past them by 200 percent. You dream of a day like this with two quality horses back to back.”

A colt by Gun Runner from the family of champion Untapable sold for $975,000 to West Bloodstock, agent for Repole Stable and St. Elias. Consigned by Gainesway, agent, the colt is out of Untapable’s full sister Time to Tap, by Tapit. The family also includes Grade 1 winner and sire Paddy O’Prado, Grade 2 winner Fun House and Grade 3 winner Majestic Eagle.

“He’s by Gun Runner – probably can’t name a hotter stallion or a stallion that’s gotten off to a hotter start than him,” Jacob West said. “And (this colt) looks a lot like his dad. The whole team loved him.

“He was kind of the ‘talking horse.’ We had a pretty good idea that he was going to cost a lot of money, but that was right about what we thought he would bring. We knew we were going to have to fight off some pretty serious competition, and I’m just glad we got him.”

West said the colt would go to trainer Todd Pletcher.

Gainesway was the session’s leading consignor, selling 21 horses for $7.9 million. They included three of the day’s 10 highest-priced yearlings.

Gainesway, agent, sold a $900,000 filly from the first crop of Mendelssohn whose dam, the Discreet Cat mare Acrobatique is a half-sister to champion Covfefe and Japanese Group 2 winner Albiano. She sold to Solis/Litt, agent.

Courtlandt Farm purchased a colt by Gun Runner out of Grade 2 winner Broadway’s Alibi, by Vindication for $875,000. He was consigned by Lane’s End, agent.

For SF Bloodstock/Starlight/Madaket, he paid $850,000 for a colt by Curlin whose 2-year-old half-brother, My Prankster, won his career debut by 10 lengths at Saratoga on Aug. 21. Consigned by Summerfield, agent for Stonestreet Bred & Raised, the colt is out of Grade 2 winner My Wandy’s Girl, by Flower Alley.

“Very well-bred horse,” Tom Ryan of SF Bloodstock said. “By Curlin, a stallion we really admire, out of a mare that looks like she has a chance to be a very good mare at this point. My Prankster looks like a good colt.

“We definitely noticed the 2-year-old winning as well as he did. We admired him at last year’s yearling sale. This colt looks like a very nice two-turn colt.”

For Charles and Susan Chu’s Baoma Corp., Lanni paid $825,000 for the yearling that preceded the Curlin colt, a filly by Quality Road who is the first foal of stakes winner My Miss Chiff, by Into Mischief. She was consigned by Taylor Made Sales Agency, agent for Town & Country Horse Farms.

“Beautiful,” Lanni said. “She was just a real quiet filly, really well-made, like a good runner.”

Lanni, agent for SF Bloodstock/Starlight/Madaket also paid $775,000 for a colt from the first crop of champion Good Magic consigned by Woods Edge Farm, agent; $675,000 for a son of Uncle Mo consigned by Gainesway, agent, and $440,000 for a Twirling Candy colt consigned by Clearsky Farms, agent.

By spending $2.74 million for the four yearlings, Lanni, agent for SF Bloodstock/Starlight/Madaket, was the session’s leading buyer.

The fourth session of the September Sale, which marks the conclusion of the two-day Book 2, begins tomorrow at 11 a.m. ET. TVG2 will have live coverage of the session from 11 a.m. to 1 p.m. The entire sale is streamed live at Keeneland.com.

The September Sale runs through Sept. 24.