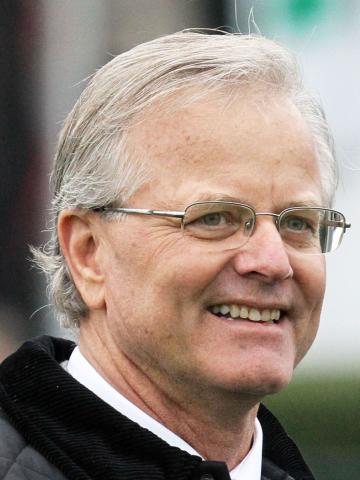 First Career Win: “My Assets at the bush tracks when I was 15. She dead-heated for first.”

Became the youngest person to be voted into the Racing Hall of Fame in 1998 when he was 45.

Bill’s father, who was a veterinarian, introduced him to Thoroughbreds. “After watching him treat a variety of ailments, I knew that I wanted to spend my life working with horses,” he said.

While still in high school, Bill trained horses with money earned from the sale of cattle and pigs he raised. His first win was with My Assets, a $320 mare he raced at unrecognized meetings in South Dakota. With purse earnings and savings, he bought Kosmic Tour for $2,000 and won the South Dakota Futurity with his new acquisition. At 19, he went to work for trainer Bob Irwin after losing his only horse in a claiming race. After three years, he joined Racing Hall of Famer Jack Van Berg’s operation, staying with him for several years until he went out on his own.

His son, Riley, who graduated from the University of Kentucky, is his Keeneland assistant.