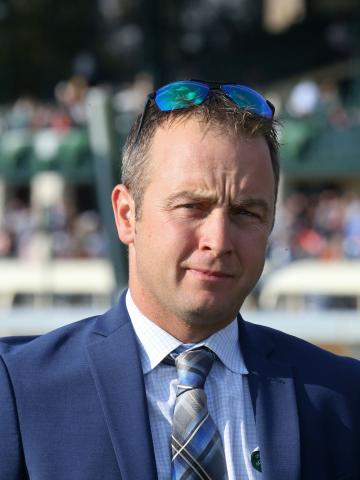 Scored his first stakes wins during the 2018 Spring Meet when Triple Chelsea won the Giant’s Causeway (L). Also won the Bewitch (G3) with Mom’s On Strike.

Won the 2021 Rood & Riddle Dowager (G3) with Summer in Saratoga during the Fall Meet.

Joe has been involved in Thoroughbred racing his entire life. His father, Marc Sharp, has trained horses since 1981, and his mother, Sara Escudero-Calhoun, rides the stable pony. His parents split up when he was young, and he spent his youth mostly in Lexington and Charles Town, West Virginia.

“I learned a whole lot of horsemanship from my dad, and my mom’s always been there for me, too,” Joe told Marty McGee of Daily Racing Form. “When I was 9, my dad put me on a mailing list for condition books from a few tracks. He’d let me pick out spots for his horses. Obviously, he would censor them, but I was on my way. I couldn’t get enough of it.”

After a few years as a jockey and exercise rider, Joe moved to training. He worked for Mike Stidham for five years and spent about four years with Mike Maker during which time he oversaw Maker’s Keeneland stable.

Joe scored his first win as a trainer on Sept. 10, 2014, when his first starter, Holiday Drama, won a claiming race at Kentucky Downs. Holiday Drama was ridden by Joe’s wife, Rosie Napravnik, a two-time leading jockey at Keeneland whose career wins include the 2014 Kentucky Oaks (G1) and Breeders’ Cup Distaff (G1) with champion Untapable and the 2012 Grey Goose Breeders’ Cup Juvenile with champion Shanghai Bobby.

Joe and Rosie, who met at Delaware Park in 2009, married in 2011. They have two children. Joe also has an older daughter.

Joe, who gallops and breezes many of the horses he trains, races at Fair Grounds during the winter and has strings in Kentucky and New York during the year.