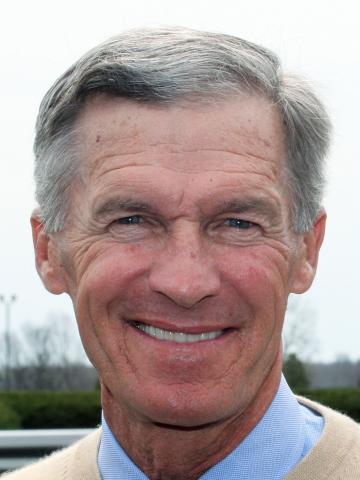 Trained Barbaro here during the 2006 Spring Meet. The colt worked five furlongs in 1:01.40 on April 23 before moving to Churchill Downs to continue preparations for his win in the Kentucky Derby (G1).

Awarded the Mr. Fitz Award, along with “Team Barbaro,” by the National Turf Writers Association in 2006.

Chosen to carry the American flag into Atlanta’s Centennial Olympic Stadium during the closing ceremonies in 1996.

Retired from show jumping as the leading money-winning rider in the sport’s American history, with more than $1.7 million.

Inducted into the Show Jumping Hall of Fame in 2005.

Michael turned to training racehorses after an exceptional career in show jumping on the national and international stage. Chosen for the U.S. Olympic Equestrian Team three times, he won a team silver medal in 1996 along with Peter Leone, Leslie Burr-Howard and Anne Kursinski. For the 1996 games, he also received the honor of carrying the American flag into the Centennial Olympic Stadium in Atlanta.

Six times he won the U.S. National Show Jumping Championship and for 20 years, he won at least one major competition each year. He retired as the leading money-winning U.S. show jumper in history with more than $1.7 million and he was inducted into the Show Jumping Hall of Fame in 2005. The induction ceremony the following April coincided with the Florida Derby (G1) that Barbaro won, forcing Michael to miss the event.

He was chosen to carry the American flag on account of his stellar equestrian career and the role he played on July 19, 1989. That day, he and his future wife, D.D. Alexander, were returning from judging a horse show in Hawaii when they missed their connection from Denver to Philadelphia. Given the choice of two flights 20 minutes apart, they decided to take United Flight 232. The plane crashed in Sioux City, Iowa, after the engines failed, killing 112 passengers. Michael and Alexander survived the crash. Michael led three siblings to safety from the wreckage and re-entered the burning plane to find an 11-month-old girl and bring her to safety. He has kept in touch with the siblings, who were in attendance at Churchill Downs for Barbaro’s Derby victory.