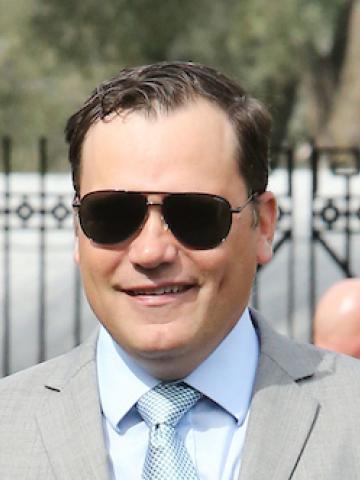 Earned the first Grade 1 win of his career when he sent out 70-1 longshot Knicks Go to win the Claiborne Breeders' Futurity (G1) during the 2018 Fall Meet.

Saddled his first starter in November 2012.

Based at Keeneland year-round.

Ben is a familiar face at Keeneland, where he won his first race during the 2013 Fall Meet.

His father, John, managed farms in Central Kentucky and trained a few racehorses. "I can't ever remember not being around horses," Ben told Mike Penna on Horse Racing Radio Network's Trainer Talk. "My dad would take me out of school on Fridays to go to Keeneland. I was in school in Versailles, so I wasn't the only one being taken out of school. He taught me a lot, the overall care of horses...horsemanship and horse management."

"Racing always excited me the most," he told Liane Crossley of KyForward.com. "Farm life was a little slow for me and you are there all the time. With racing, you get to go different places and travel around. I grew up riding a lot and it seemed natural to go to the race track and be an exercise rider."

While studying business at the University of Kentucky, Ben broke yearlings and worked the horse sales. He went to work for Bill Harrigan at Miacomet Farm in Georgetown, Ky., breaking yearlings. He spent 3½ years with trainer Fred Seitz, exercising horses and becoming his assistant. While working for Harrigan, Ben had met trainer Christophe Clement. He decided he wanted to work for a bigger outift and gain more exposure, so he went to work for Clement in February 2008.

Ben handled Clement's young horses at Keeneland and oversaw the trainer's string here during race meets. He went out on his own in 2012.