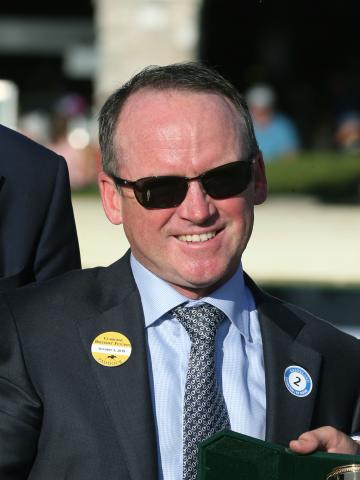 Earned first Grade 1 victory of career and first Keeneland stakes victory when Maxfield won the 2019 Claiborne Breeders’ Futurity. Maxfield is a homebred owned by Godolphin, for whom he worked prior to obtaining his trainer’s license.

Early successes include two horses who won stakes at Santa Anita on Breeders’ Cup weekend at Santa Anita. The first was Cary Street, who he claimed for $10,000 in February 2013 and won the 2014 Las Vegas Marathon (G2). The second was Scuba, who won the 2016 Marathon and is now the Walsh stable’s popular pony.

Raised on a small farm in Ireland that included sheep and dairy cows, Brendan learned to ride on his childhood pony. He honed his horsemanship at the Irish National Stud and Sheikh Mohammed Bin Rashid Al Maktoum’s Kildangan Stud, which led to working as an exercise rider and stable foreman for Sheikh Mohammed’s racing division in Dubai and at Arlington Park in Chicago. He then worked for 3½ years for Mark Wallace in Newmarket, England.

Brendan became an assistant to fellow Irishman Eddie Kenneally in 2007 to learn the U.S. training style prior to obtaining his trainer license in 2011.