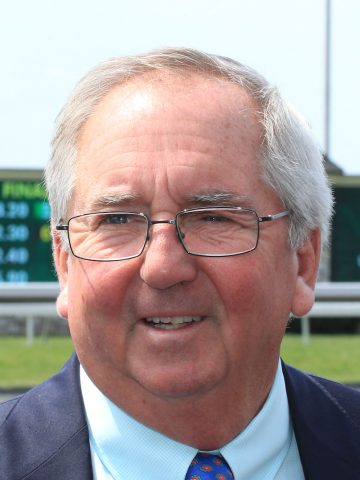 First Keeneland stakes win was the 1983 Spinster (G1) with Try Something New, which marked the first Grade 1 victory of his career. Other Spinster winners are Dispute (1994), Inside Information (1995) and Carriage Trail (2008).

Won the 2021 Kentucky Utilities Transylvania (G3) with Scarlett Sky during the Spring Meet.

Inducted into the Racing Hall of Fame in 2004.

Shug grew up in Lexington, where his father, a real estate agent, would signal to the betting clerks at Keeneland that it was OK to let the boy place a bet. Shug attended the University of Mississippi for a while before he began walking hots for his friend David Carr and later became his assistant. He started working as a groom for Hall of Fame trainer Frank Whiteley in 1974 and was an assistant for Whiteley’s son, David, for five years.

HIs son Chip is a Keeneland Sales Associate.