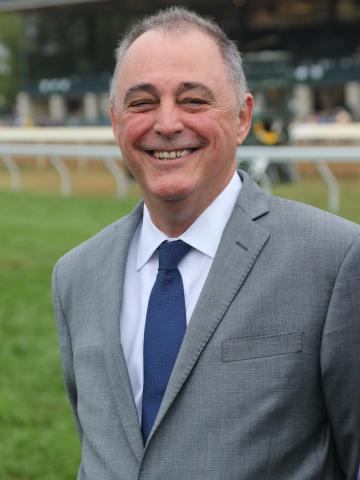 Ignacio Correas IV comes from an Argentinian family who has bred racehorses since 1872. The first Don Ignacio Correas traveled to England in 1906 and came home with Epsom Derby winner Diamond Jubilee, who became a foundation stallion in Argentina and solidified the Correas name in Argentine racing.

With aspirations to become a jockey, Ignacio briefly attended jockey school at age 14 before growing too tall for the sport. He left university after a year to work as an assistant manager for a Thoroughbred farm in Brazil, Haras Santa Maria de Araras.  After traveling to Europe to learn more about the business, he decided he preferred training to farm management and started working as a groom for the family’s trainer, Jose Irzusda, in 1979. By December 1984, he was out on his own as an Argentine trainer. With more than 100 horses in his stable, he trained such standouts as Festin (ARG), who became a Grade 1 winner in North America.

Though he was a successful trainer in Argentina, Ignacio came to the U.S. in 2002 due to economic downfall in his home country. His first job in New York was as an assistant to trainer Billy Badgett, then he moved to Virginia with his family to work on a farm. He first came to Lexington in 2003, and raced one horse of his own between 2003 and 2004. As a freelance exercise rider, he galloped horses at Keeneland and took on a variety of odd jobs. Trainer Bill Currin hired Ignacio, who worked six years as his assistant in California. He later became the farm trainer for Kevin Plank’s Sagamore Farm of Maryland.

In 2015, Ignacio went back out on his own as a trainer. His top runners in the U.S. have been three horses bred in Argentina: Breeders' Cup Distaff (G1) winner Blue Prize, Grade 2 winner Kasaqui and Grade 3 winner Dona Bruja.

He is based at Keeneland for much of the year.