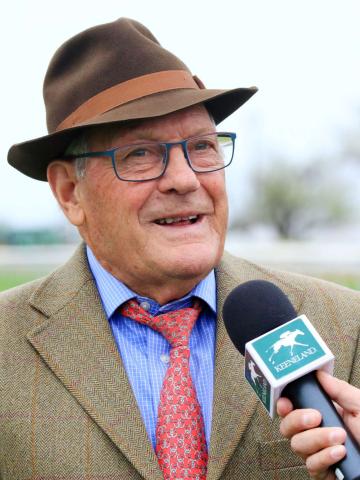 First Keeneland stakes win was the 1990 Forerunner (G3) with Izvestia.

Became the first Canadian-based trainer to be elected to the Racing Hall of Fame in 2012.

Recorded 2,000th victory with Lady Speightspeare, dead-heat winner of the Nassau (G2) at Woodbine on July 2, 2022.

Inducted into the Canadian Horse Racing Hall of Fame in 1999, his first year of eligibility.

Roger grew up riding horses and competed on the international show jumping circuit, briefly attempting a career as an amateur steeplechase rider. He earned a degree in agriculture, specializing in farm management, from Parkhurst College in England.

After moving to Canada in 1970, Roger worked with horses and opened a chain of clothing boutiques but returned to horses full time in about a year. He took out his trainer’s license in 1971 after galloping horses for other trainers and began his training career with Roy Kenney’s Gateway Farms in Milton, Ontario. He later trained for Charles “Bud” Baker’s Norcliffe Stable and Bud Willmot’s Kinghaven Farms.