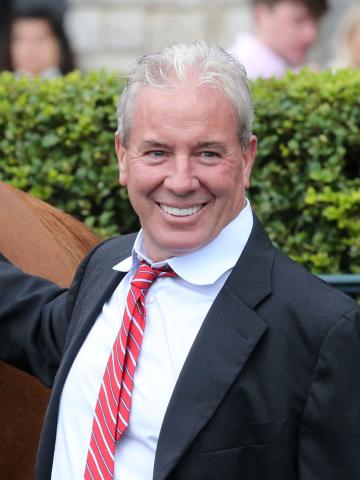 First Keeneland stakes win was the 2011 Giant’s Causeway (L) with Holiday for Kitten.

On April 21, 2016, sent out Lady Aurelia to win her career debut. Lady Aurelia went on to capture the Queen Mary (G2) at Royal Ascot and the Darley Prix Morny (G1) at Deauville.

Training operation is based at Keeneland year-round.

Owns Ward Ranch near Ocala, Florida, where he begins training his young horses.

Judy the Beauty was named champion female sprinter of 2014.

Royal Ascot wins (12): Became the first American trainer to saddle a winner at Royal Ascot in 2009 when Strike the Tiger won the Windsor Castle at odds of 33-1. The next day, he sent out Jealous Again to win the Queen Mary (G2).

At 2, No Nay Never, Lady Aurelia and Campanelle (IRE) followed their Royal Ascot wins with victories in the Prix Morny (G1) in Deauville in France.

Ward recorded his 2,000th North American win May 6, 2021, at Churchill Downs when Gold for Kitten won the sixth race. Thanks to his international success, especially at Royal Ascot, Ward has several more career victories to his credit.

Wesley was born into a racing family. His father, Dennis, is a former jockey who is now a trainer and occasionally saddles horses for his son. His grandfather, Jim Dailey, was a steeplechase rider and later a popular outrider in New York for 29 years.

Wesley began riding at age 12, competing at fairs in Washington, Alberta, British Columbia and Montana. On the day he turned 16, the junior in high school began riding at Aqueduct with Lenny Goodman as his agent. Goodman, a friend of Jim Dailey’s, previously handled the books of Steve Cauthen and Declan Murphy. Though he didn’t win any races that day, Wesley won five in the next three days.

Recipient of the 1984 Eclipse Award as outstanding apprentice, Wesley later rode in Italy, Singapore and Malaysia. He retired in 1989, tired of battling weight. He began training in 1991.

He maintains a year-round base at Keeneland, where he has tremendous success with his 2-year-old first-time starters during the Spring Meets.