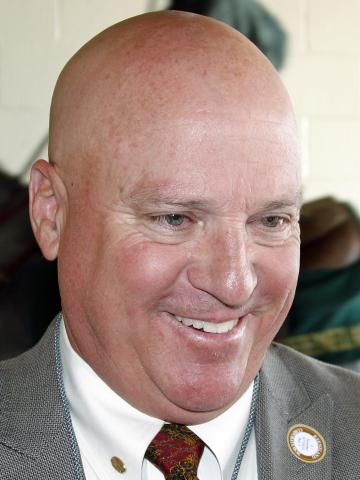 While growing up, Rusty worked on the family farm on weekends and during summers. He began breaking yearlings and went to work for trainer Eugene Euster. While attending the University of Kentucky, he took pre-veterinary classes but the race track held more appeal for him. He galloped horses for Euster and became his assistant trainer. By 1975, he had gone out on his own.

Rusty went to New York in 1980 and received a break in 1985 when he was named to train a division of John Ed Anthony’s Loblolly Farm after Shug McGaughey left to train for the Phipps family. More recently, he has enjoyed success while training for G. Watts Humphrey Jr.

His wife, Sarah, a former exercise rider, works with him in their training operation. Her role includes escorting the horses to the track while riding the stable pony. They were married in 1996.